I’ve been having a great time watching connected films and a variety of horror books this season, but it’s very possible that re-visiting the Batman run by Doug Moench and Kelley Jones has been one of my favorite experiences so far. As I mentioned in the first part, these post-KnightFall books were bedrock-forming for my knowledge of not just the Dark Knight, but also the imagery of horror as put through Jones’ incredibly capable lens. As good as the Batman developments are in these issues as he regains his life after the Bane and Azrael incidents, it’s equally exciting to see these two creators work their magic on a variety of villains and co-stars.

END_OF_DOCUMENT_TOKEN_TO_BE_REPLACED 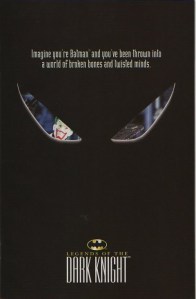 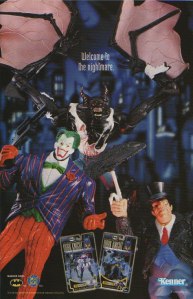 This is one of those every-other-page ads. You get the top one first on the right hand, then turn it and BLAMMO, you’ve got these crazy-detailed figures of Joker, Penguin and Man-Bat staring back at you. I was a huge fan of the Legends of the Dark Knight line from Kenner in the late 90s along with this line’s predecessor which was an Elseworlds-inspired line called Legends of Batman and featured pirate Batman and even Az-Bats. What I liked about LOTDK was that the figures were bigger and they were a lot more detailed. I have Scarecrow and Bane in my collection, which aren’t pictured in the ad, and I remember being really excited about them. That’s still my favorite Scarecrow figure of all time. I almost picked up the Joker one too. I believe he looks so buff because his suit actually explodes off of his body. These ads were scanned out of 1998’s Major Bummer #12.