END_OF_DOCUMENT_TOKEN_TO_BE_REPLACED

As I mentioned when I reviewed Christopher Pike’s Weekend, I was way into the world of young adult horror in my earlier years. Long before I dove into the mega scare franchises that had taken on legendary status to a kid growing up in the late 80s and 90s, I read a metric ton of books by Pike and R.L. Stine.

So, when I saw a free copy of The Ghost Next Door from Stine’s epic and beloved Goosebumps series, I had to grab it. I don’t think I read this one as a kid, I’d probably moved on to Fear Street by that point, but it was a fun look back at the kinds of stories I remember from childhood.

In the cast of The Ghost Next Door, Hannah’s all alone in her small town during the summer. Her friends have all gone off to camp or are on extended vacations, so she’s pretty surprised to see Danny appear and say he’s been living next door for a while. Hannah and her family have no recollection of him actually moving in and weird, wild things start happening that make her think that he’s the titular specter.

Not to toot my own horn too much, but I called the big twist pretty early on this 1993 book for children. I take more pride in that than I probably should as a 33 year old man. But, I think this would have made my 10 year old brain SPIN had I read it in 1993 when it first came out. I’ve often said that it doesn’t really matter how good the movies are you see as a kid because they become important for a variety of reasons. In other words, the very idea of playing with narrative structure like Tarantino did is mind-blowing even if you saw it for the first time by one of the many 90s imitators (or if your first exposure to the Citizen Kane story was through an episode of Tiny Toons or Alvin And The Chipmiunks or whathaveyou).

Let’s call this paragraph SPOILER TERRITORY if you’re so inclined to avoid such things. The big reveal here is that Hannah is actually the ghost, which explains why her friends aren’t writing her back and only a few people actually seem to interact with her. I caught on to this when she was writing the letter to her best friend complaining about how nothing was happening (I think she actually says “Everything is dead around here,” or something to that extent) and she wants to hear back. It seemed unlikely that her bestie would totally abandon her like that (or maybe I’m just a hopeful romantic when it comes to besties). I wonder if kids who read this book were more or less likely to catch the Sixth Sense twist coming because they’d been exposed to something similar.

Okay, back out of spoiler country now. I had a great time reading this story, not just because it was a nice trip down memory lane, but also an easy read that I could pick up and put down while I was taking care of the kids for a few days. It also makes me want to get a Won’t Somebody PLEASE Think Of The Children podcast because it’s super interesting finding out what kinds of stories we gravitated to as kids and how they changed the way we understand how these things work. Maybe in a few months… 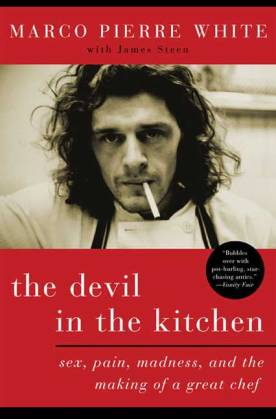 I don’t read nearly as much as I used to. Part of the reason is that I’m a slow reader, part is that I love reading comics and part is that, thanks to having a pair of kiddos, I don’t have the time or attention span to devote to the hobby as I once did. However, I have discovered that my three-year-old daughter’s bedtime is a good time to get some reading done. After I read her books, I lay next to her bed in the dark until she doses off. So, as long as I have a solid book on my phone, I’m pretty good to go.

. I knew absolutely nothing about White going into this book, but it looked like a British version of Anthony Bourdain’s Kitchen Confidential, so I bit for a couple bucks (like most of my e-books, I got it on the cheap) and really enjoyed the experience.

White’s story begins as a child (as most do) and ventures on up through his development as a chef, to the leader of his own kitchen and ultimately a world-renowned figure in the world of food. He gave jobs to people like Gordon Ramsey and Curtis Stone  while creating award-winning, lavish restaurants in the 80s and beyond. While their stories are different in many ways, if you like Bourdain’s books, you’ll like this one. 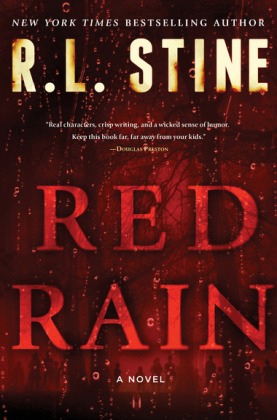 by R.L. Stine is one of the few fiction novels I’ve read all the way through on my phone. This was another discounted book that I grabbed. From the title and the cover, I assumed this was a vampire story, but was way off base. This one follows a woman who goes to a small island for her travel blog but after a devastating hurricane, seems changed to the point where she adopts a pair of creepy twin boys and brings them to live with her husband, daughter and son in New York.

This was an interesting story that never quite grabbed me. For some reason I was never able to zero in on what these kids look like which was a major barrier given plot points I don’t want to spoil. I also had a really hard time sympathizing with the mother character. The father becomes the punching bag, but while he’s getting dumped on, it felt like I was supposed to wonder more about the wife, but instead, I found her far too easy to write off and ignore. Because of that, I also found her to be a wildly annoying character to the point where I almost stopped reading.

But, I did wind up enjoying the end of the book which finally revealed what the kids were up to. I liked how all that played out, so while I didn’t necessarily enjoy all of this book, it ended in a way that I appreciated which is nice because I used to read Fear Street and Goosebumps books constantly as a kid. I don’t say this often, but after I was done, I felt like Red Rain would have made a better movie than a book. 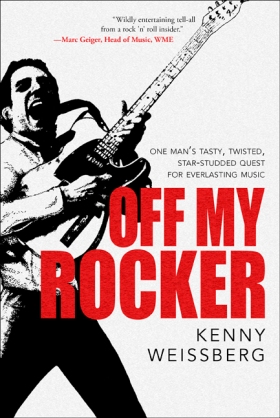 Off My Rocker: One Man’s Tasty, Twisted, Star-Studded Quest for Everlasting Music

by Kenny Weissberg was another random purchase for a few bucks (the equivalent of the going through the Barnes & Noble discount table). I knew nothing about Weissberg or his deal, but when I read that he was a DJ, music writer and concert promoter, I was easily sold.

Right off the bat, this book reminded me of three others I’ve read since starting this blog. It’s got a little of The Real Animal House mixed with Sonic Boom and some of George Hamilton’s autobiography Don’t Mind If I Do in that it’s one man’s (mostly) fond remembrance of an important time in music, told from the inside. Like Hamilton, he used his confidence and skills to move from one part of life to another, often taking chances and risks that paid off.

To get into a bit more detail, Weissberg grew up a huge music fan on the East Coast and eventually wound up becoming one of the biggest freeform DJs in Colorado. Talking about music lead to interviewing musicians on the air and a career in concert and record reviews in print. When that work dried up, he fronted a band before moving to California to promote concerts, a gig that lasted him 20-something years. Along the way he met a variety of music professionals who he doesn’t mind writing about. Weissberg tells his stories with a good nature that brings you into the tales instead of feeling like you’re on the outside and also lets you in on previously unknown details without ever getting mean.

In addition to enjoying stories about people who make their own way in life, no matter how improbably, I also appreciated how Weissberg took this thing he loved and turned it into a series of careers that lasted several decades. That’s something I hope I can say down the line, though I just realized I’ve been doing what I do for about 10, so I guess I’m doing alright.