In this post I’m going to run down the movies that I really enjoyed that came out in the past few years. Some are brandy new while others have been out for a bit. The movie that still sticks with me the most and pops into my head every few weeks is the 2013 Israeli film Big Bad Wolves by Aharon Keshales and Navot Papushado. I already wrote about this dark revenge film with some hilarious moments, but just wanted to reiterate its complicated greatness.

It’s also very much worth repeating that Jackson Stewart’s Beyond The Gates, is a great nostalgic horror film that nods to those halcyon days of video stores and VHS board games. In my book, the more well-told and creepy horror films with nods to the past, the better. Not just because of the nostalgia factor, but because it’s a nice way to connect to a shared, geeky, horror-fan past.

You know, what? I’ll also say again that Crimson Peak and Better Watch Out are fantastic for very different reasons. I haven’t seen nearly enough of Guillermo del Toro’s films, but fully intend to. The Shape Of Water looks incredible. Also, as I said recently, Better Watch Out did the nearly unthinkable and actually surprised me!

Now, moving on to movies I haven’t already blogged about and keeping with the theme of bonkers babysitting films carrying over from Better Watch Out, I was surprised by how much I liked McG’s The Babysitter on Netflix. I had heard a few things about it, but not too much and definitely didn’t know he directed when I turned it on. The result is a fun, slick and stylish (overly so for some viewers, I’m sure)

Samara Weaving is totally captivating as the lead and her charge, young Cole (Judah Lewis) is understandable smitten with her. I especially like how McG establishes their very cool relationship early on in the film, which makes the bonkers turn after Cole’s supposed to be in bed all the more wild. In some ways, this one reminded me a little of All Cheerleaders Must Die, which felt like it might have been made for a younger audience — like this one — but also featured enough for an old horror fan like myself to dig. 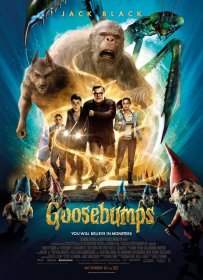 If you’re looking for a scary movie to show a younger audience of the kid variety instead of the teen one, I think Rob Letterman’s 2015 Goosebumps starring Jack Black is a fantastic gateway. I can’t seem to find a link to the gateway horror list I wrote for Blumhouse.com at the moment, but this easily made the list. I hadn’t seen it before and was very impressed with how Letterman and company managed to mix in R.L. Stine (Black) as a character as well as all of his books (his first copies of each literally contain the monster of the story).

Better yet, this film’s got plenty of straight-ahead references to specific horror films as well as more general ones. I believe I wrote this in my list, but if you’re watching this with a new horror film, just ask which bits and pieces they like and go from there when it comes to recommendations!

I can’t think of a proper segue, so I’ll just directly shift over to Kevin Smith’s Yoga Hosers. Smith’s been a favorite director of mine since I saw Mallrats for the first time back in the 90s. I’ve listened to nearly every episode of his Smodcast podcast and have been inspired by his desire to switch courses when it comes to his career and just make things happen, including this cartoony movie starring his daughter Harley Quinn and her best friend Lily-Rose Depp as they fight an ancient evil, especially because I listened to and laughed along to the original podcast episode this film is based on.

Of all the movies on this list, I’d imagine Yoga Hosers is the most divisive. I think if you go in understanding that it’s over-the-top and crazy on purpose, you’ll hopefully have a good time. I mean, it’s got Johnny Depp in a ridiculous disguise, teenage Satanists and tiny monster creatures played by Smith himself. I didn’t know the tone going in, but it presented itself pretty early on and I was on board!

While on the subject of tone, The Belko Experiment had one of the most intense ones I’ve experienced in a long time thanks to director Greg McLean. The plot of this one is very simple: a bunch of workers in the Colombian branch of Belko Industries get locked in the building and have to follow orders piped in or die. Those orders tend to revolve around killing a certain number of their co-workers or else they get blown up by the implants put into their brains.

Some of the posters for this movie called it a cross between Office Space and Battle Royale, but I thought of it more as The Office meets Cube (or maybe Saw, but I only watched that movie once and don’t really remember it). McLean and his actors do an incredible job of making the journey from normal day to disbelief to full-on murderous mayhem as the workers come to understand how serious this situation is.

Finally, I’ll close out with the other film I watched this year that keeps popping up in my head: Kevin Kolsch and Dennis Widmyer’s Starry Eyes from 2014. This was another one that I heard a lot about on Shock Waves and finally got around to putting in my eyes this year.

Alex Essoe stars as a wannabe actress in Hollywood who spends more time working at a cheesy restaurant than booking gigs. She lives in an apartment complex with a bunch of other 20-something wannabes who have banded together, but don’t necessarily like each other. All Essoe’s Sarah wants is to be a famous actress and she’ll do anything to get it, including ripping her own hair out to nail an audition and get naked for a callback, but not have sex with the producer (at first).

This is spoilery, so skip this graph if you don’t want to read anymore about the movie. My favorite part of the movie is that Sarah returns to her colony of wannabes and actually gets support and an offer to work on one of her friends’ indie flicks. She has a chance to achieve an aspect of her dream, but gets mad at some of her cohorts and runs right back to the predatory producer who infects her with something sinister.

From there you get her descent into madness as Sarah lets whatever’s inside her destroy her life and the lives around her, but maybe she’ll still get that role she wants! This one’s as gross and creepy in regards to body horror as it is to what people will do to each other to get ahead all of which Essoe brilliantly conveys.  I’ve seen their episodes of Scream and am even more interested to watch Holidays knowing they’ve got a segment in there, but I’m really looking forward to whatever Kolsch and Widmyer have planned next. Frankly, I was so impressed with everyone on this list that I’m anxiously looking forward to digging into their other films.