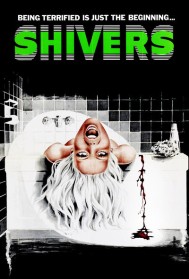 Last week I found myself in the enviable position of being in the house alone during the day with a bunch of work to do on my laptop and the television unoccupied by children demanding to watch the same two episodes of Bubble Guppies on repeat. So, like anyone who hasn’t been able to stay up past 11 on a week night in recent memory, I decided to watch three movies in a row all on Amazon Prime! END_OF_DOCUMENT_TOKEN_TO_BE_REPLACED 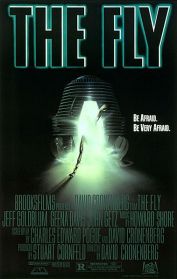 I know, I know. Yesterday I said I was going to watch The Fly remake and its sequel today, but after having so much fun with David Cronenberg’s wild take on the original 50s classic, I decided to switch the theme from flies to Cronenberg and watched Shivers (or They Came From Within, but I like the one-word title and not just because it’s shorter).

Much as I was charmed by the original Fly, I liked the remake a lot more as a horror movie and as a story in general. I like that, this time around, the scientist (Jeff Goldblum) isn’t married to the girl (Geena Davis) who is a reporter for a science magazine instead of a doting wife. I also like that the story is more linear than the original because it doesn’t cut the legs out from under the drama (we know he’s dead in the first few minutes, we just don’t know who or what he is at that point). Plus, how can you go wrong with the scenes of Goldbulm’s parts falling off. I’ve watched a lot of horror movies this month, but I think this might be the only one to give me the willies (regular readers with better memories might be able to correct me on that one as my memory sucks).

I think that this might have been my first full, unrated viewing of the movie. Like I said yesterday, I knew the basic plot, but that was from seeing the movie on TV. I don’t remember giving it a rent when I was a budding horror fan back in the day, but it could have happened (remember that bad memory I mentioned?). I’m on board with people who think this is a great horror movie even if, as a comic book and horror fan, I’ve been significantly smashed in the face with the whole “scientist getting obsessed with his project and not caring about anything else” storyline. The effects, the script (I didn’t realize “Be afraid, be very afraid” came from this movie) and the casting are all spot on. Goldbulm first looks like a geeky scientist and then a fly creature, Davis looks like a kinda nerdy science journo (though not a very good one as it takes only a matter of days for her to sleep with her subject, what would Gay Talese say?). The awful clothing and hair can be a little distracting at times, but overall I really, really liked this flick. A question to Fly fans, is Fly II worth a watch? I’ve never seen it. 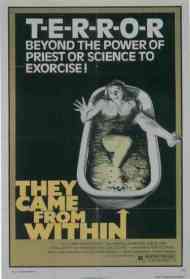 Shivers is kind of a combination of Dawn of the Dead and Towering Inferno with some Alien effects thrown in. The interesting part? The movie was made before Dawn (1978), was made before Alien and only really share a similar kind of setting with Inferno (which only came out the year before). The idea is that these people live in a huge building with all the amenities (medical facilities, stores, all that kind of stuff, so basically a really tall mall you can live in without have to fly in via helicopter). As it happens, a scientist who lived in the building was developing a parasite that would break man down to his basic urges. He supposedly killed them all, but that’s not the case and these weird worm things spread throughout the building making crazy sex zombies who just want to bone you and pass on the blood and sex lust to you.

Like The Fly, this movie has some spectacular effects. The scene reminiscent of Alien comes when a guy has one of the parasites in his stomach expanding inside, much like the chest buster. I can’t remember if Shivers influenced Alien or if the effects just happened at the same time. Cronenberg’s vision obviously grew in the ten or so years between these two movies, but you can see where he was coming from here.

Even though Cronenberg was known for being a really out-there director, it’s surprising how many still-taboo elements he dealt with this in the movie. You’ve got sexually transmitted disease, sexual assault, murder, pedophilia, the place of lust in society and what can happen if man gives over to his animalistic tendencies. It’s not exactly clear where the director comes down on these subjects, which is cool because it gives the viewer room to make their own decisions. Even though it’s brave, the movie could have done with some editing. Much like Scanners, this movie takes a lot of time not to get going but to get from middle to end. Luckily, by the time he did The Fly, it seems like Cronenberg learned a little bit about brevity.

I can’t remember if I first saw this movie as a rental from my beloved Family Video back in the day, but I do know that I purchased it my Freshman year of college from a going-out-of-business mom and pop video store in my college town. I went a few times and bought Dawn of the Dead (in a Day of the Dead box), Mom, Hot Potato and this one on VHS. I’ve watched it a bunch of times and even converted it to DVD thanks to my combo, recordable VHS/DVD unit. It’s actually pretty fun watching the movie with all the weird hiccups of a tape, but on DVD. There’s something great about that look that really works for older, smaller budget movies. I didn’t realize it, but the tape has an extra feature at the end with Cronenberg talking about the movie. I didn’t watch it this time around, though I might in the next few days. I think I’m going to watch a few un-reviewed favorites tomorrow starting with Dawn of the Dead. We’ll see where I wind up from there.