Last week I found myself in the enviable position of being in the house alone during the day with a bunch of work to do on my laptop and the television unoccupied by children demanding to watch the same two episodes of Bubble Guppies on repeat. So, like anyone who hasn’t been able to stay up past 11 on a week night in recent memory, I decided to watch three movies in a row all on Amazon Prime!

I checked out Shivers first. I’ve already written about this film and chronicled my weird, VHS past with it, but it’s still a highly effective effort from David Cronenberg back when he wanted to scare you with life and monsters instead of just the former. He’s just so great at taking every day elements of life boosting them into unnerving territory.

Also, as I mentioned in that other post, I bought this film at the same time I bought a VHS copy of Dawn Of The Dead and realized that Romero’s first four zombie films all relate to this one (I include Land in that because of the high-rise situation). I’m not saying that means anything, but it’s interesting to see how these directors from the same era dealt with some very similar issues in their films.

From there, I moved on the an anthology called After Midnight. I was drawn to this one because of the cover and the idea that it’s a bunch of college kids telling supposedly true scare stories as part of a class. This film, written and directed by Ken and Jim Wheat, revolves around a professor who gets reprimanded after tricking his psychology class into thinking he killed himself in front of them (seems reasonable). He explains that they can keep digging into these ideas of fear if they all meet at his house and tell stories. What could possibly go wrong there?

So, there’s a very EC-ish one where a woman tricks her dude into thinking they’re in a haunted house when it’s really just a surprise birthday party. Another features a bunch of high school girls foolishly driving around the bad part of town with very little gas and running into a crazy guy. It’s a nice bit of urban horror that does a nice job of feeling of-its-day and also fresh. Finally, a woman who works for an answering service gets into it with a celebrity’s stalker. Then you’ve got the wrap up of the wrap-around story which involves fire, revenge and dreams.

I fell asleep for about 10 minutes with about 15 minutes left, but I feel confident in saying that this is a pretty solid and fun anthology that features the girl from Mr. Belvedere, Jennifer from Nightmare On Elm Street Part III AND CSI‘s Marg Helgenberger. It actually kind of reminded me of the Scary Stories books which definitely built on urban legends that made their way through schools back in the 80s and 90s. 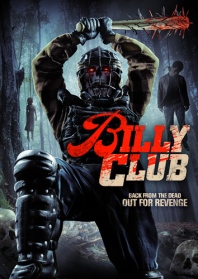 Finally, I moved on to Billy Club, a slasher flick from 2013 mostly set in 1996. This is the second feature from writer and director Drew Rosas and Nick Sommer who created a nice little horror flick filled with likeable characters and a unique-looking killer. At times, it definitely feels and looks like an early effort, but I forgive those thanks to a well thought out story that had me spooked and even a little confused, but in a good way.

Alison, Kyle and Danny all live in the same town they grew up in. Back when they were kids, one of the boys on their baseball team went nuts and killed the coach and two teammates. The trio get really excited when former temmate Bobby returns to town and they decide to have a baseball team reunion at the coach’s old lake cabin (which apparently no one else owns and is still pretty well kept 15 years later). While there, a guy dressed in a baseball-inspired costumes starts killing other teammates before focusing on our heroes.

There are some twists and turns towards the end that actually make me want to give this movie another watch at some point to see if it’s all above board or not, but I really appreciated this effort by some solid filmmakers finding their footing. I enjoyed all four of the main characters and, even though some of them might feel like Kevin Smith clones early on, they grow to be deeper and more interesting than I first thought. There’s also a nice mix of classic and modern filming at work here with GoPros or something like it utilized well.

At the end of the day, Billy Club didn’t blow me away, but it gave me what I wanted: a solid slasher with likeable characters that’s also well acted and showed me a few things I’ve never seen before. Has anyone seen their previous effort Blood Junkie? I’d be curious to see that and will also keep an eye out for their future films.