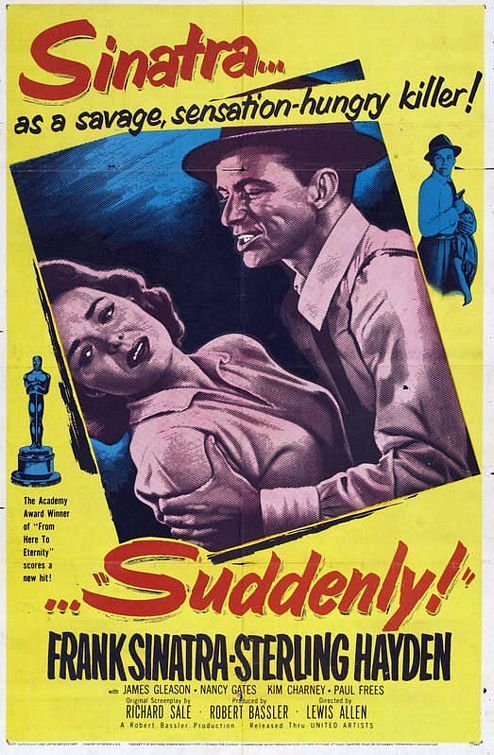 There is exactly one reason why I added Suddenly to my NetBox queue and his name is Frank Sinatra. I love Old Blue Eyes and have had a minor obsession with the Rat Pack aesthetic for as long as I can remember. So, when I came across this movies, which I honestly had never heard of, I just added it and forgot about it. Thanks to some recent queue shuffling, it made its way towards the top and I checked it out last night. Aside from feeling like an old TV show as opposed to a movie, I really loved this movie. See, the idea is that the president (who would have been Dwight D. Eisenhower the year the movie came out) is passing through a small town called Suddenly. The Secret Service lock the town down because they’ve got word of an assassination attempt. Meanwhile, the potential assassin, played by Sinatra, and his goons hole up in an old man’s house along with his widowed daughter in law, her son, the town sheriff and another local. While he holds them captive, Sinatra explains exactly how he’s going to get away with this crime that no one has ever gotten away with. It’s really interesting to hear him defend his actions, the other people telling him he’s nuts and the overall feeling that something like that is actually impossible. Think about it, this is 9 full years before JFK (a friend of Sinatra’s) was killed and the three presidents assassinated before that were in 1865 (Lincoln), 1881 (James Garfield) and 1901 (William McKinley). Even though it’s been over 40 years since JFK was killed, it still feels like it could happen any time thanks to the flurry of assassinations that took place around that same time and the later attempt on Ronald Reagan. Hell, there’s a whole Wiki page devoted just to presidential assassination attempts (I just realized this post might get me put on some kind of watch list, yeesh). Anyway, it’s a quick little movie you can watch in under an hour and a half and I highly recommend it not only for Sinatra’s great performance but also because it’s an interesting piece of fiction from a time that seems almost foreign to us now.