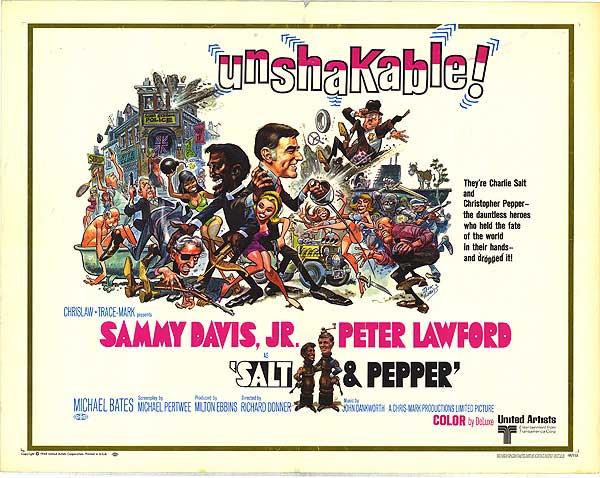 Welcome to a new semi-recurring feature on the blog: Rat Pack Theater. I am a big fan of Frank Sinatra, Dean Martin, Sammy Davis Jr., Peter Lawford and Joey Bishop and pretty much everything they did. Well, everything I’ve seen, which I’ll admit hasn’t been too too much. I dig their music and their movies are a lot of fun. I’ve retroactively dubbed a few other reviews as RPT (Sinatra’s Suddenly and Martin’s Murderers’ Row). These will be a showcase of any movie starring any combination of these guys or just them on their own. I stumbled upon Salt & Pepper which I actually thought starred Davis and Martin because I was just looking at the little icon on Netflix and didn’t do any actual reading (apparently I’m lazy even when I don’t mean to be). As you can see from the above poster (I love lost wider posters) it actually stars Lawford who I think I’ve only ever seen in the original Ocean’s 11.

The film’s about buddies and London club owners Salt and Pepper (Sammy’s Salt, Peter’s Pepper) who find themselves embroiled in some international espionage when a Chinese call girl turns up dead in one of their rooms. But, as you might expect, this isn’t a serious thriller, but more of a madcap, super-fun action comedy that features the less-than-muscle bound Lawford and Davis transforming from regular guy club owners into a pair of ass-kickers who took on a whole army of bumbling bad guys. The plot itself gets pretty complicated, but it’s not super important as the whole endeavor seems invented for Davis and Lawford to look awesome (and hey, missions accomplished!).

For you music fans, Davis does a really fun musical number called “I Like The Way You Dance” where he fake plays the guitar (he strums it on the bass parts and holds it awkwardly because there’s no strap) and does some slick moves seemingly inspired by Chuck Berry. Luckily someone put this bad boy on YouTube so you can enjoy it here.

The movie seems to have been one of Richard Donner’s first big directing gigs, which is cool. If you’re looking for a wacky, very 60s movie on Netflix Instant, this is a perfect choice!