I first had this idea before Christmas and started writing down notes with the intent of posting this on New Year’s Day. Well, yesterday was a little rough and there was football to watch (well done OSU and Penn State) so here we go. These aren’t resolutions for me and my relationship with comics, but things I’d like to see happen in the next year. As with any list I’ll ever write, it’s in no particular order. 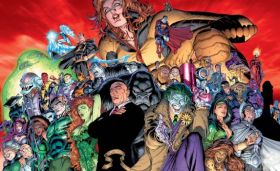 We’ve been inundated with these huge teams of supervillains who band together to offer each other the kind of support the heroes have, but let’s face it, it’s played out and it can only ever end in one way: disaster. And not just disaster for the characters, but also for the readers. Ever since the Secret Society kicked off, this has been the go-to plan to take on superhero teams. It’s working alright in Dark Reign/Siege I guess, but when they tried doing it in Justice League of America and Salvation Run, it was just a mess. Let’s keep our villain teams small and tight and evil! 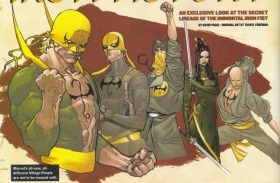 The title on this one probably doesn’t really describe what I’m talking about very well. Basically, I mean the hero who discovers that he or she is actually part of a long line of heroes or part of a larger group he or she had no idea about. I’m generally a fan of this concept as I love continuity and legacy characters (to an extent), but this general concept is starting to feel a little over-used at the moment. The Immortal Iron Fist did it really well, making Danny Rand but one of many Iron Fists and they’re doing something similar in the Red Tornado miniseries right now with Red Tornado discovering there are a few other Red robots. I feel like there have been more examples lately, but can’t think of them now. I’m not saying get rid of it all together, but just ease up on it.

Obviously the debate over whether you want a gorgeous book that’s super late or an on-time book without a huge name drawing is a long-ranging one and everyone feels differently about it. For me, I’d rather have a book come out on time, but I’m more lenient on artists I really like. But, when it comes to a book that’s important to continuity I think the big two should be a little bit more responsible about who they put on it. I really like Ethan Van Sciver’s art, but how long has Flash: Rebirth been going on and the story of his return still hasn’t been fully explained. Even worse is Bryan Hitch on Captain America: Reborn. Not only don’t I understand Hitch’s appeal (that book would look a thousand times better if Steve Epting was drawing it), but you don’t see the time in the art. Steve Rogers is back! And how do we know that? A bunch of other comic books that Marvel had to publish to keep the rest of their line running on relative time told us. I say, keep these slower guys on covers or maybe OGNs.

I understand the financial risk of doing OGNs. You’ve got to put all this money into something that can take half a year or more to produce without getting the monthly input of single issues and then you’ve got to put out a $15-50 book that you hope people will buy. If not, you’re out a lot of money. At least with a traditional trade, you’ve got an idea of how many copies the single issues sold to gauge potential book interested. But, let’s be honest, certain artists and writers are going to sell butt loads of comics and trades. If you’re going to continue doing All Star Batman and Robin, why not just wait and put out a trade, it’ll sell. Or something like “Old Man Logan” by Mark Millar and Steve McNiven. Why put that in a monthly comic book when it could have easily been an OGN or at least a miniseries? More OGNs will keep the top notch artists busy, doing (hopefully) amazing work without gumming up the works for everything else. 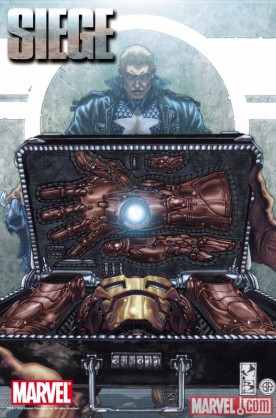 I understand that events are cash cows. Anything with a Siege or Blackest Night connection jumps up in sales like crazy. I get that. But come on. How long has Dark Reign been going on? And Secret Invasion before it? And Civil War? Heck, Marvel’s advertising Siege as a story seven years in the making. SEVEN YEARS! Meanwhile, Blackest Night has been going on for God knows how long with innumerable tie-ins, but can anyone keep track of the story? I read comics very sporadically and in big bursts not on a weekly basis, so it’s hard for me to remember what all is going on. I’m glad to hear that Siege is planned as four issues, we’ll see if it doesn’t get expanded at the last minute though, it’s happened before. I also wouldn’t be opposed to shorter arcs in monthly comics (Iike Jonah Hex). Don’t worry, we’ll still buy the trades even if they’re made up from several smaller stories instead of one big one.

DC and Marvel are FULL of weird and interesting characters who don’t really get their chance to shine much, but that doesn’t mean there aren’t good stories to be told with those characters. I’d like to see more back-ups in comics. Both companies have done this, though I think DC has done a better job. We’ll see how it goes with the recently announced restructuring that will be going on soon though. In addition to back-ups, I’d like to see a really good anthology comic. Something that combines the first arc of JSA Classified (Geoff Johns and Amanda Conner telling Power Girl’s origin during Infinite Crisis) with the short story style from the most recent version of Marvel Comics Presents. These kinds of books always seem to fall off either because the creative team is no longer a draw or it has no real relevance to what’s going on in the overall universe. I’d like to see several 2-10 page stories under one roof, one of which should be by a big time creative team and/or tie into whatever event is going on. The other stories don’t all have to tie-in, but should all be really good and not just filler. These books would also give the companies a place to bring in new writing talent to cut their teeth, offering more chances than the Halloween and Holiday one-shots do.

Both Marvel and DC have really good comics for kids, I don’t think anyone would argue with that. I try and do my part by passing whatever kids comics I get to my younger cousin who LOVES superheroes, but there needs to be more of a push to get the kids hooked. Step one should be getting comics in more places than just the dank shops we have all grown to love. But kids also need to be told that comics exist. It might sound crazy, but tons of people don’t even know comics are still made and there’s no reason a kid would either. I’d like to see commercials during comic-based cartoons and something more during the movies. Comic fans have enough to worry about with the apparent demise of the printing industry (I’m not completely convinced, but we’ll see), we shouldn’t also have to worry about the industry dying out regardless in 50 years when everyone my age starts keeling over clutching floppies.

Which brings me to my most desired resolution and the one I think is the most important: comics need to make the jump to digital. I’m not saying get rid of hard copies, but we need an iTunes for comics. Marvel got the ball rolling with their Digital Comics Unlimited, and the other companies are dabbling, but I bet more people would get into comics if they could download the comics and read them on a device like their phone or whatever magical device Apple’s working on next. I’ve had a lot of conversations about this with my friends in the industry and everyone agrees it’s a gigantic undertaking with all kinds of questions needing answers, but the comic industry has the benefit of the music industry going through this change first, so comics can learn from music’s mistakes (and hopefully they will). I say, start with archive material like a full run of Action Comics or Avengers. Make them basic PDFs and, if downloading comics proves to be as popular as ripping MP3s was, then the major tech companies will have to create a product that can support the full color of a comic. Remember, when we all first started ripping our music, we didn’t have an iPod to play them on. Those came later. Heck, if comics were on iTunes, just think of the millions of new eyes that will see them and recognize their existence. If the price is right, they might even download a few and get hooked. It will hopefully be a new golden age of comics, I’ve got my fingers crossed.