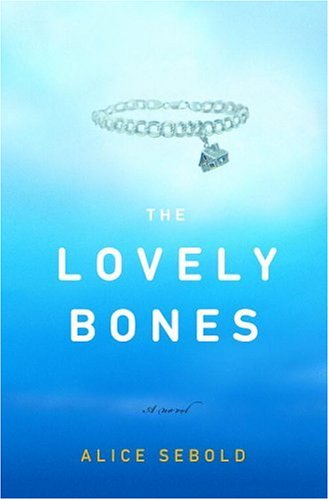 Now that I’m no long commuting to work and filling my train time with reading, I haven’t been reading books as much as I was this summer. I feel weird about lounging around and reading a book during the day as it feels like a time I should be at least looking for work or freelance. So, that leaves the evenings and night. Unlike watching movies, TV or reading comics, I can’t read a book with distractions. It’s not a problem with comics. I can have something like Doctor Who on while reading through a stack of comics and remember what’s going on in both no problem, but that’s not the case with books. Lately, I’ve been going to bed when the missus does and reading. Her mom let her borrow her copy of The Lovely Bones by Alice Sebold and I was drawn to it even though I’m still trying to slog through The Yiddish Policeman’s Union because I thought I might want to read it before seeing the movie (though I’m not sure if I want to after hearing the review over on the Totally Rad Show, though none of them had read the book).

After having so much trouble finding a good foothold in TYPU, I was almost shocked at how immediately I was sucked into this story. Boy is it intense. The idea behind the book is that a young girl named Susie gets raped and murdered, but she keeps an eye on her family and friends from her heaven. Her killer is a neighbor, which her father and later her sister come to suspect, but the police don’t have any actual evidence and the case flounders for years.

The first night I sat reading this book int he dark, lit only by a new reading light, I was really freaked out. Not because of the ghost-like nature of the story, but because of the actual point of the story: hideous violence is all around us and can happen to anyone at any time. But that doesn’t mean the story is all doom and gloom and negative. It’s more about learning to cope and live with that violence after it’s been committed. I found that to be a really interesting theme, especially as some characters do a great job of living with the horror and growing, while others run and hide and others just sit and stew in it.

As much as I liked the book, I did have a problem with part of it. Let’s say the book breaks down into quarters. The first quarter is about Susie getting used to being dead and explaining all the things that happened. The second focuses on her father and sister’s suspicions towards her killer. The third has everyone growing up and apart and the fourth brings everyone back together and ends the story. That’s way oversimplifying things mind you, but it makes sense for my point. The first two quarters are really tightly written and kept me completely engaged, but the third just kind of spins its wheels. I guess you get some good information about some of the ancillary characters and you learn about where some of her friends ended up and how her sister got engaged in an old abandoned house and what the killer was doing while on the run (he skipped town in the second quarter), but it lacks the focus and tightness that the previous two quarters did. It’s not bad and the writing is just as solid, but it didn’t do a whole lot for me. Maybe that’s because it was late last night and I wanted to finish the book (which I did by 3:15AM last night), but I wasn’t a big fan. Also, I feel like the focus shifts. The first two quarters not only focus on the family, friends and killer, but also the search for her body (which her killer put in a safe and dumped in a sinkhole) and nailing the killer, but then that just kind of disappears in the third quarter. Sure other bodies and evidence start showing up and the killer actually comes back to town in the fourth, but nothing happens! That would be the one story point that I disliked, but I can understand why Sebold went that way. Hey, that’s life. Killers go free, bodies stay missing and crimes remain unsolved.

In the end, though, I really did enjoy this book, as much as you can enjoy this type of thing. Sebold strikes a fantastic balance between her fanciful heaven and the raw emotion that went into her rape and murder and how that affected her family. I don’t think I’ve been as emotionally exhausted reading the first few chapters of a book as I was that first night. It wasn’t just the terrible things happening to the little girl, but I really put myself in the place of her parents and friends and tried to imagine what all that would be like and it was rough, especially the not knowing what’s going on. Even though I had my problems with the last half of the book, I do like that Sebold followed these characters many years after the fact to show us how they each coped in different ways. It seems like other stories like this would wrap things up in a nice bow and be done with it. There’s even some possession stuff in the end for horror movie fans! All in all, a good work of fiction.

Two quick minor things I wanted to point out that I found interesting and fun. One, Susie’s younger brother loves Marvel comics. He’s a big fan of Wolveine, Hulk and Spider-Man and each one helps him deal with things differently. Also, as I was reading the book, it reminded me of an author named Aimee Bender who came to my college and did a reading that I really enjoyed because her style seemed a lot like the one I was developing at the time in my fiction writing questions. A few years back I read her book called An Invisible Sign Of My Own, which was quirky and strange and fascinating. Anyway, as it turns out, Sebold is friends with her and thanks her in the very back of the book. Crazy, right?