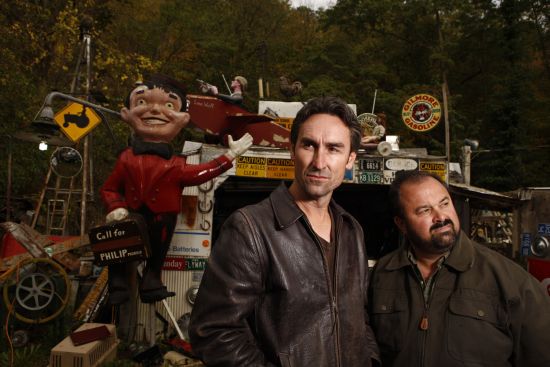 I watch a lot of TV. Well, I should say that TV’s on a lot while I’m working from home. When I first got let go from my old job I was kind of excited to catch up on some of the daily marathons that channels like VH1 and Bravo seem to do on a weekly basis. But once I did get caught up and those seasons ended, I needed something new to watch. Thankfully, cable is full of great shows like American Pickers on the History Channel. I have no idea when the new episodes of the series come on, but I should check that out because I think as of right now, I’m completely caught up on the show. The basic idea is that these two guys drive around the country looking for antiques to buy that they then sell through their business Antique Archaeology. They sell to everyone from regular people to prop departments to other dealers to places like restaurants who need some crazy crap to put on the walls. They’ve got a woman who works back in their homebase of Iowa who feeds them leads of people to contact, but the real gold in the show comes from them doing what they call freestyle picking, which is when they drive around and dig through peoples’ garages, barns, houses and attics. With the owners’ permission of course.

Em’s parents are actually antique fans. They go around to yard sales, auctions and flea markets looking for things to pick up that my mother in law then sells in her antique shop, so it’s kind of cool to see people on TV taking that to the next step. When I told Em about the show, she didn’t like the idea because she said these guys probably went around and tried to rip people off. From what I’ve seen, the guys are clearly looking to make a profit (as anyone in the game is, I would imagine), but they’re not trying to gouge anyone. There’s one episode in particular where they actually offer a lady more than she asks on some things because she’s lowballing herself. Plus, they’re just kind of fun guys to watch as they get really excited about this stuff and geek out the way I would if I was driving around, going into peoples’ houses and asking if they had comics I could look through.

Keep your eyes peeled for an episode called “Mole Man” in which the guys are driving around Pennsylvania and randomly stop off at an old house that happens to belong to a man named Ron who not only collected all kinds of things throughout his long life, but also started digging underground caverns that he filled with his stuff. The guys went down there as he showed them his handiwork and there was definitely a serial killer vibe to the encounter (what exactly could you do to stop even an old guy in a crazy-thin hall 25 feet underground?). It really is amazing what people can do when they’ve got an idea. I wish there was a video on YouTube, but I can’t seem to find anything.

So, yeah, I’m having a great time watching this show and I think it’s cool to see people on television who might not otherwise get their 15 minutes. Plus, you get kind of sucked into the story as the guys get some of the things they picked appraised to see if they made their money’s worth. All in all it seems like a fun job that I wouldn’t mind having, even though I am enjoying my gig as a freelancer right now. Hey, maybe they need someone to write for their site.