As I mentioned yesterday, I’ve got a 3 3/4-inch Jason Voorhees figure that’s part of Mezco’s Cinema Of Fear line. Even though I’m not generally a fan of the 3 3/4-inch scale of action figures (I loved G.I. Joes as a kid, but generally I prefer larger toys), I really dig this line. As of right now it only consists of three figures: Jason, Freddy Krueger and Leatherface. The Jason figure I have is actually an exclusive version Mezco gave out at New York Toy Fair a year or two back, the only difference as far as I know is that the mask on the NYTF exclusive is actually glow in the dark which is pretty creepy.

Anyway, as much as I dig Jason (he IS my second favorite slasher), this post is actually about the Freddy figure which Rickey gave me for Christmas or my birthday (I don’t mean to sound scatterbrained, but they’re only a few months apart). What I really like about these little figures (and am starting to like about a lot of Hasbro’s 3 3/4-inch figures) is the high level of detail and articulation that comes in such a little package. Sure, the face of the figure could look more like Robert Englund, but I really like how the iconic hat, sweater and, of course, knife glove turned out (don’t be fooled by the comparison between the photos below, I think the Freddy photo was actually flipped because all the other pics I looked at have the glove on the right hand, like the figure does).

The articulation is sick too as you can kind of see in the below photo. Freddy can actually be contorted so much that it’s hard to keep him standing on his generic blood splattered black disk-stand he comes with. 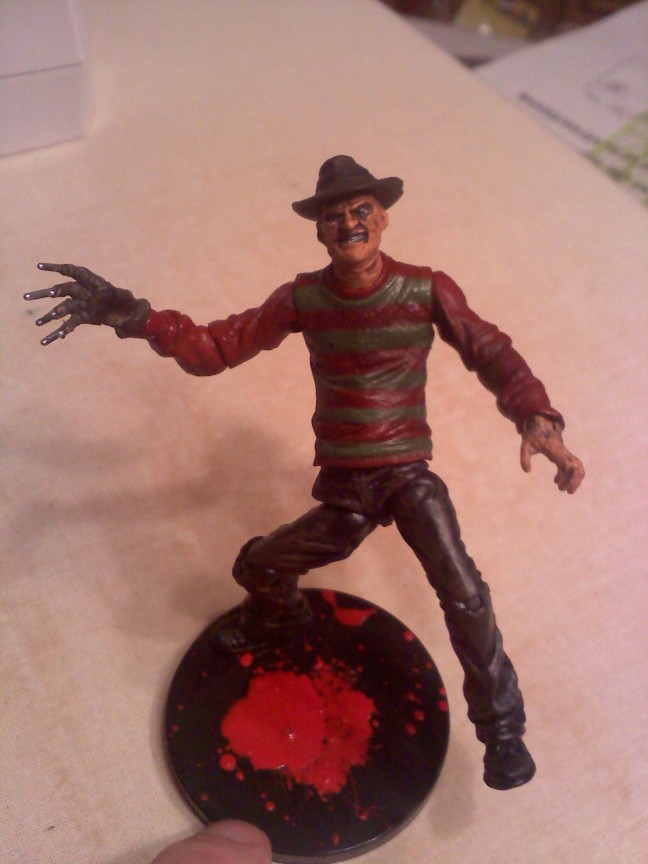 Freddy’s got neck, shoulder, elbow, wrist, waist, hip, knee and ankle joints, all of which come together to offer up some pretty awesome poses. Freddy and his ilk look great on a desk–though I realize that that might not be appropriate for many office spaces–or possible stalking a Christmas village OR hanging out in a shadow box. If they weren’t so creepy looking, I’d even recommend them for kids because there’s such playability here. I don’t think Mezco is still selling these badboys, but you can track them down online. You’ll have to ask Rickey how he got him!