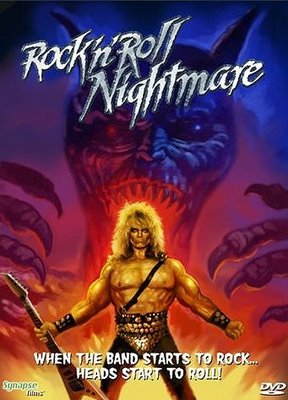 Thanks to Horror Movie A Day’s review of Black Roses, I’ve been introduced into the weird world of 80s rock and roll horror movies. Well, technically, I’d seen the ridiculously bad Slumber Party Massacre 2 when I was in high school and again at a Manly Movie Night which has to count with the weird demon Elvis impersonator running around and killing kids with a drill guitar, but I didn’t realize it was a whole sub genre. HMAD’s post and the comments pointed me towards Black Roses and Rock N Roll Nightmare, both of which I added to the top of my queue. It’s too bad you don’t see more punk rock, glam, grunge or hip hop based horror.

Anyway, I only kind of half paid attention to RNRN, but I still thoutoughly enjoyed it, even though the beginning eerily mimics a story I’ve been working on since last summer. Anyway, it’s about this metal band that goes to a remote-ish house to record their new album, but things don’t go as planned as his band members and their groupies start getting eaten by some evil force which takes over various peoples’ bodies. Then, at the end, the demon turns into Satan and the lead singer from the band reveals that he’s an archangel. There’s some weirdness about shadows and whatnot at the end, but their battle is pretty rad. I really wish I had watching this flick at a Manly Movie Night or with a few friends because it seemed like there were plenty of laughable parts. I mean, hell, just look at that DVD cover. It’s a think of weird glory. 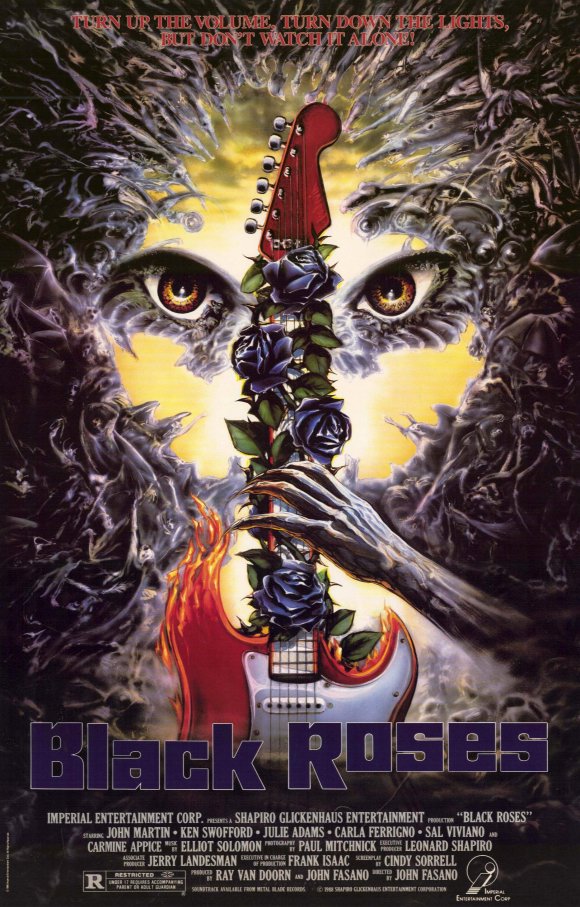 On the other hand, I did pay attention to Black Roses and man is it a strange movie. It starts off with a monster band playing a show and then getting broken up by the cops, but zombies run around. Then we see a couple of rad, 80s-tastic sports cars roll into a small town, stand around and then plaster fliers everywhere. Soon enough we meet the hip, cool English teacher at the high school and are shown that there’s a group of parents who are outraged that a metal group wants to perform in their town. So, it’s going to be like a horror version of Footloose? Nope, right after that, the mayor gets up and he’s pretty level headed about the whole thing. In fact, the adults end up coming off WAY better than the kids in this flick, as seemingly every kid in town is very easily swayed by the band, who of course really are demons whose sound somehow transforms the rest of the town into zombies or demons or girls who will have sex with old men or parent killers. There isn’t a single hero kid who doesn’t get sucked in and tries to help. In fact, the hero is actually the English teacher, which might be a first for horror. So, really, the message of this movie is that metal really is evil and English teachers are awesome.

The end of the movie is pretty great as the teach faces off against the lead singer-turned demon. You also get a scene where Big Pussy himself, Vincent Pastore gets eaten by a monster coming out of a speaker. Gah, plus, look at that poster it looks like an Ed Hardy shirt! And this one where a kid wearing an Incredible Hulk sweatshirt starts throwing his Super Powers figures (Superman, Batman and Aquaman) into the fire place, but keeps his Masters of the Universe Scare Glow figure safe. His dad, who is clearly in the same room looks up and says “Jason what are you still doing up?” Then the kid says he was punishing the bad guys. Oh and a few minutes or scenes later, the dad screws his daughter’s friend after coming back from one of the many demon rock concerts.

So, overall it’s a pretty crazy movie. Not particularly violent or gory aside from a throat slicing that’s kinda rough. Black Roses would also make for a great viewing with friends. Anyone know of any other rock and roll horror films I should check out? I guess Jennifer’s Body might kind sorta count and so might Dark Floors even though you have no idea the characters are base don a band if you go in cold.