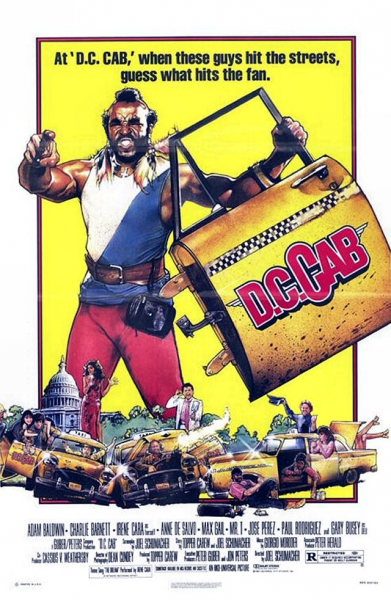 Wow, how is this movie not up there with other 80s icon movies like Beverly Hills Cop and Fletch? Well, possibly because it’s not a tight script like those movies. Many, I love those two flicks. Anyway, DC Cab might suffer from less good plot, but it benefits from starring Mr. T, Adam Bladwin (Jane from Firefly), Gary Busey, Bill Maher and Paul Rodriguez. The idea is that Baldwin’s dad was a cabbie but he died, so Baldwin came to DC to learn how to be a cabbie with the ensemble cast. Like Car Wash, another movie involving Joel Schumacker (he wrote the story for this one and directed) DC Cab features a bunch of blue collar dudes just trying to make a living and be generally alright people while putting up with all the bullshit that comes from doing those kinds of jobs.

In the end, the movie turns out to be a weird kind of ransom story with Baldwin and some jaded rich children getting kidnapped and his fellow cabbies rallying to save him (and the kids presumably).

I added this movie to my queue for two reasons. The first being that I remembered this poster/cover from the old VHS days of video rental and the second being that it stars my namesake Mr. T. Okay, so he’s not my namesake, but I did get the chance to interview the guy once while at Wizard and it was a truly amazing experience (look for the full transcript coming soon). He’s kind of a bit player in the movie, but he does his usual schtick. The real surprise here was Busey who I didn’t even know was in the flick but acted exactly as you might expect him to. I had a great time watching this flick last night and would recommend anyone to do the same on Netflix’s instant watch, but the movie expires today. Maybe this will be like one of those Starz movies that “deletes” and then reappears right away, but I would recommend this for any 80s action/comedy fans who don’t mind watching a little nonsense before seeing Mr. T rough some dudes up.