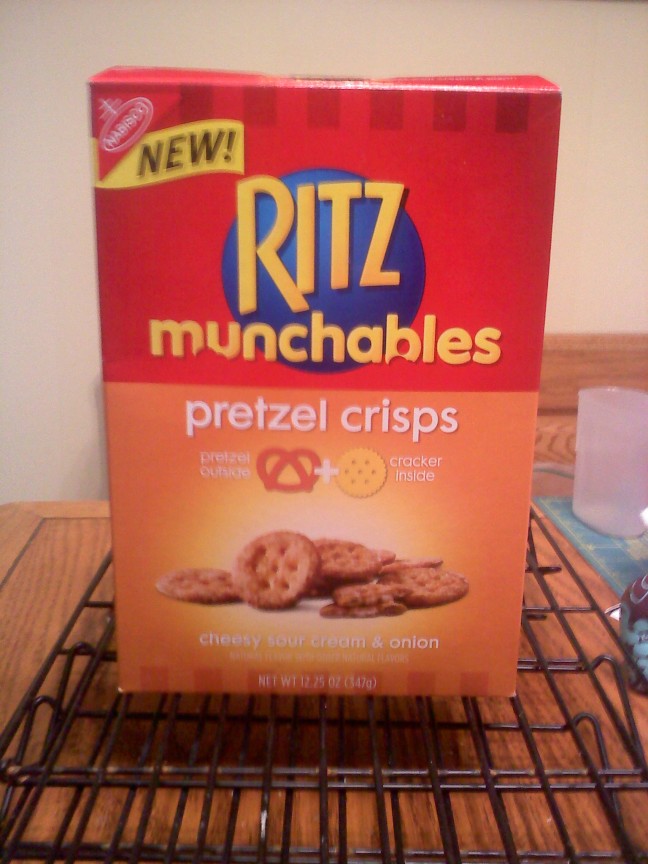 I believe I’ve mentioned my love for Mr. Phipp’s Pretzel Chips, a snack that took the saltiness of a pretzel and put it together with a chip. The disappeared a while ago never to return again. Recently, though, I’ve seen a resurgence of pretzel and cracker combinations that have piqued my interest.

While at the grocery store a few weeks back, I saw this box of Ritz Munchables. I thought they were just the regular pretzel/cracker combo, but instead I got the cheesy sour cream and onion flavor. I didn’t really look at the weird half and half box so I got a surprise when I opened the box and tasted the cracker.

They were pretty good, but I don’t think I would get the flavored versions again. If I want that kind of flavor, I’ll go for chips or something. In my mind, combining the goodness of buttery Ritz crackers and pretzels, is good enough, you don’t need to add extra flavors on top of that. Note, they didn’t taste bad, but I would have been satisfied with the bare bones Munchable instead of this enhanced version.

What I wanted from the Munchables, Town House’s FlipSides totally delivered. The crackers are nice and buttery, but not too much and the pretzel side is good and salty. Really, it’s two great tastes that taste great together. I killed this whole box in just a few days, because I kept them near my work area which was probably a good idea. They’re also good while drinking and playing video games.

So, if you’re not satisfied with just pretzels or crackers, give FlipSides a try and if you think to yourself “I need more flava!” hit up the flavored Munchables. I will say that, while an okay substitute for actual pretzels neither of these are better, in my opinion that some really good pretzels, but they’re an interesting thing to try every now and then and would probably be great for parties.