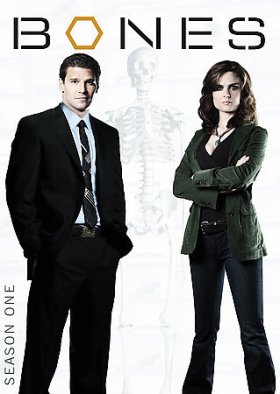 Bones is one of those shows that I always liked, but never kept up on. I remember watching the very first episode based on my like of David Boreanaz from Buffy and Angel and I’ve watched random episodes here and there but it always seemed to be on opposite other shows I was already a fan of.

The show’s a procedural crime drama that pairs FBI Agent Seeley Booth (Boreanaz) with forensic anthropologist/author Temperance “Bones” Brennan (Emily Deschanel) who works for a fictional government run museum called the Jeffersonian which is an analog for the Smithsonian. Bones works with a group of fellow scientists which has staid mostly consistent over the series’ currently five seasons (though only the first four are on Netflix instant). Each episode finds them solving a murder investigation which pits Bones’ no-nonsense, incredibly logical and literal genius mind with Booth’s vast real life people skills against the murderers who of course always get interviewed early on, lie and get away with it until science and intuition solve the case. 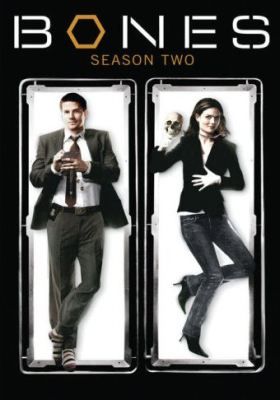 While Bones’ too-literal and often callous comments do get a little grating (you’ll find yourself asking “doesn’t she EVER learn?”), I still really enjoy her interactions with Booth and how she does seem to be learning how to act like a normal human being and not a logical robot over the four seasons (we’ve seen some of the Season 5 episodes, but only  a few).

We went through the entire first four seasons in a little under four weeks, I think, which should show how much we liked it. I think what sets Bones apart from other procedural shows is that the characters seem interesting, fleshed out and well performed. Boreanaz and Deschanel are pitch perfect in their roles and the side characters like Angela Montenegro, Jack Hodgins, Cam Saroyan, Zack Addy and Lance Sweets all feel equally fleshed out. I’ve watched other shows like the various CSIs, Castle and various Law & Orders, but none of them have really grabbed me as much as Bones and I think it all boils down to the characters, because, let’s be honest, these shows all kind of dip into the same well when it comes to stories. 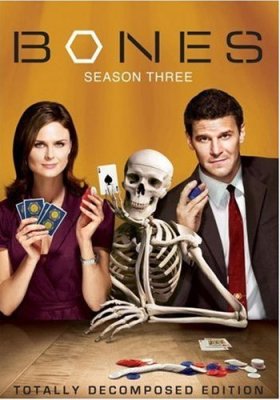 You know the drill, for every story about a woman getting killed by her husband who’s really a criminal type stories, you’ll get something about weird sex stuff (Furries on CSI, horse play on Bones) or the oft-used “what if an analog for a celebrity got killed?” While some of the plots might seem kind of groan-worthy at first look, the writers put an interesting enough spin on things to make them seem if not fresh, at least not sour and old.

Oh, and geeks will probably appreciate this show. Definitely science geeks. Heck, they’re practically the superheroes of this show. But, there’s also a good deal of comic and sci-fi geekiness, though I will admit that the episodes that followed a dead comic geek (who of course dressed up as a homemade hero with his geekier friends) and the one set in a Comic-Con-like setting might be a little insulting to more sensitive fans (though, honestly, the comic episode did get on my nerves). Seeing Booth read an old Green Lantern comic in the bathtub and especially seeing Bones and Cam dress up as Wonder Woman and Catwoman respectively definitely help matters. 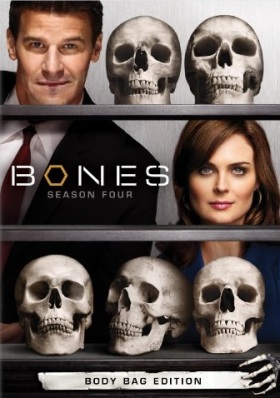 Even with as much as I love the show and want to get caught up on the latest season, I do have a few complaints. Bones still rags on Booth’s religion almost always which seems like she should calm down on because they’re partners. Even if she doesn’t believe in religion, doesn’t mean she should make fun of it to her friend who does believe. My other big complaint about the series has some serious SPOILERS, so skip to the next paragraph if you don’t want things spoiled. The third season has an overarching story about a serial killer/cannibal called Gormogon. Gormogon always has an apprentice and it turns out at the end of the season that Zack Addy–a young scientist who was possibly more aloof and logical than Bones, yet the kid brother of the lab–was in fact Gormogon’s apprentice and apparently killed  a man. I was shocked. It really didn’t wash with me story-wise. I’m guessing I wasn’t the only one whose craw this stuck in because at some point in Season 4, Addy shows up to help solve a case and also admits to Sweets (who is an FBI shrink) that he didn’t actually kill the guy, but told Gormogon where to find him. It still bums me out because the story seemed lame and wasted a great character for nothing really. I do appreciate the rotating cast of Bones’ new grad students which includes Carla Gallo and Joel Moore!

Okay spoilers over. Well kind of. Now I’m going to talk about the Season 4 series finale in detail, so I guess this is SPOILER territory too if you haven’t seen the whole series. It turns out towards the end of the fourth season that Booth has a brain tumor, which explains why he’s been seeing ghosts and talking to people who aren’t really there (like Stewie from Family Guy). The actual last episode of the series is an alternate reality story that takes all the characters and settings of the regular series and flips the script. In this reality Booth and Bones are married and own a club called The Lab which uses the lab set with a few alterations. All the side characters going back a pretty good amount of time show up in one form or another and there’s also some really clever mentions of other aspects of the previous seasons. We actually saw this episode last year and enjoyed it, but nowhere near as much this time around because we got all the in jokes. I’m sure it was also good for the more romantic fans out there to see Booth and Bones together, though I really appreciate the fact that they’ve staid just partners so far. It just makes sense that way to me.

So, we’re all finished, but now we need the fifth season to end so we can catch up on what’s going on. I’ve never wanted a time traveling DVR more!