It’s been a year or two since I read Dennis Lehane’s 2003 novel Shutter Island, so my memories are a little fuzzy. I do remember liking it. A lot. So much so, that I pretty much knocked the whole thing out over a weekend. That’s no small feat for me, as I read about as fast as a toddler going through his first Sesame Street book. There was a frenetic pace and such a deep level of intrigue in the novel, though, that I could barely put it down. Even the missus marveled at the speed with which I dispatched the book.

The book follows two U.S. Marshalls as they investigate an unusual escape on Shutter Island, a mental institute off the coast of Massachusetts near Boston. As the story progresses we learn more and more about our hero Teddy Daniels and the patients and doctors who keep Shutter Island in business. I will say that I highly recommend the book for anyone who enjoys mysteries, psychological adventures and perfectly crafted twist endings.

Shutter Island is a difficult book to talk about without revealing the surprise ending, so consider the rest of this review to be filled with SPOILERS until the last paragraph. Towards the end of the book (maybe 2/3 or 3/4 of the way through, maybe someone with a better memory can help me out with the exact moment) we find out that Teddy is actually insane. Leading up to this point, we’re made to think that Teddy is actually being persecuted by the government for looking too much into Shutter Island, which he thinks of as a place where experimental surgeries are performed on the insane. Lehane writes this so well and gets us so much on Teddy’s side that when the doctor first tells him he’s not only no longer a Marshall, but he’s been on Shutter Island as a patient for two years, we don’t believe him, but soon enough, we realize that Lehane and Teddy have both taken us for a ride, one with his incredible writing, the other with his delusions. In the great history of surprise twists, I’d say it’s more like The Usual Suspects where it doesn’t make everything you’ve just seen pointless, but allows you to examine it in a different light on further reading. I’ll talk more about the twist in a moment. 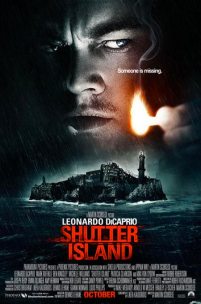 It seemed like just a few weeks after I finished the book, it came out that Martin Scorsese would be directing a movie version with Leoardo DiCaprio and Mark Ruffalo playing the Marshalls. I was curious to see how the whole thing would play out and found out over the weekend when watching the movie on On Demand with the missus and her parents at their house in New Hampshire. Damn, it was great. There’s always a concern with great directors that, as they age, they lose their magic, but Scorsese doesn’t seem to have that problem, thankfully.

The film version had such a fantastic sense of atmosphere the entire time. Something was wrong and we just didn’t know what it was, unless, of course, you read the book or know the twist ending in which case you know why and it’s fun to see how it’s played out. Watching the movie, I felt like I did the second time I watched Usual Suspects (I love that movie, if you couldn’t tell already). I knew what all the sideways glances really meant and why people were acting funny and just like that movie, it all works. Scorses even goes so far as to make some really strange edits like a woman drinking from a glass of what that was just handed to her, but isn’t there, to capture how things get fuzzy for Teddy. He’s got sufficient mental problems that keep him out of regular society and that comes across the second time around.

Overall, I was very impressed with everyone’s performances–Ben Kingsley, Max von Sydow and Michelle Williams are also in the flick–along with Scorcese’s direction which captured the feelings I remember when reading the book. Most importantly, he pulled the twist ending off without it feeling too out-of-nowhere. Like I said there were so many “huh?” moments early on that, once the twist is revealed, they make sense, like why does Ruffalo have such trouble getting his holster off his belt? In the book, the key to the twist was getting us so far on Teddy’s side that the mere idea of the truth just doesn’t seem possible until we get all the real information and discover one of the basic rules of literature and storytelling: never trust a first person narrator. In this case, Teddy believes he’s telling the truth and really does believe he’s seeing the people he’s seeing, but, as we learn, that’s just not the case. I like how well first Lehane, then Scorcese handled putting the audience so far on Teddy’s side and then launching us over to the doctor’s side. Well done all around.

So, now that we’re out of spoiler territory, I recommend both the book and the movie, though try not get the end ruined for you. It’s a lot of fun to experience it unadulterated for the very first time and then to experience it again to see what’s really what from the beginning.