I hope everyone had a good Fourth of July weekend. I’m always a fan of extra days off work even if I spent the day on the couch, writing and reading comics which isn’t too different than my usual Monday. Here’s some pictures of the weekend which was filled with fireworks (two different shows) and a trip down to the Meadowlands for the New Jersey State Fair to celebrate Rickey’s birthday. But first, fireworks.

This is the interaction I have with the missus every 4th: she gets REALLY excited about going to see fireworks and I couldn’t care less. Hey, it’s fireworks, how different will this be than the last local fireworks show? Then we go and once it starts, I realize I’m in love with things exploding in the sky! 20 minutes later, though, my love has faded and I’m waiting for the finale, usually surrounded by kids asking their dad if they’re watching the grand finale and for some reason the dad never responds “I can’t tell you until it’s over because it means ‘the end’ dummies.” Finally, once the finale hits it’s like ZOMG “Look how many things are exploding in the sky!!!!!” Finales are awesome. 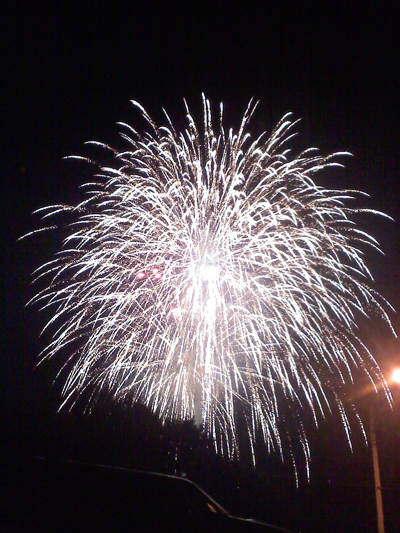 These fireworks were in Newburgh on the 2nd. We went over to our friends Amy and John’s house. They live within walking distance to the park where they were shot off, so we cooked out and then went over to the fireworks which were pretty impressive. Equally impressive was the festival-like atmosphere in the baseball field directly behind where we were sitting. I went to get some sodas and found myself surrounded by teen and 20-something craziness. I saw a DJ shooting foam out into a crowd and a dude dressed up either like a raccoon or skunk getting hugged by a girl who looked exactly like Avril Lavine, but wearing a wife beater and white boxer shorts, by which I don’t mean underwear, but the kind of shorts boxers wear. Crazy, but not the craziest thing I’d see all weekend. For that, let’s head down to the New Jersey State Fair! 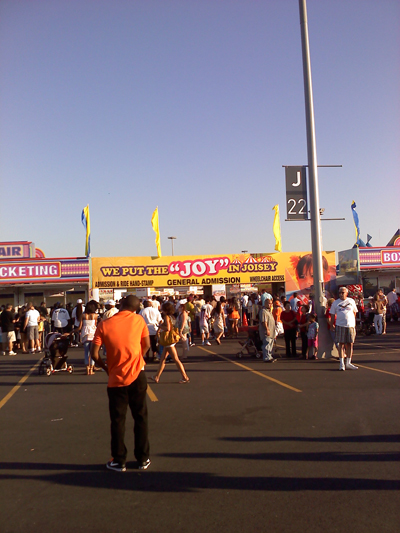 “We put the ‘joy’ in Joisey.” That’s a helluva way to advertise your state fair, but it’s not the best way. This is:

In case you can’t read it, the sign says “Animals: Live, Stuffed, Fried.” It’s not often that I can find this many good photos before even going INTO a place. But, hey, this is the New Jersey State Fair. But that couldn’t really prepare us for what we saw inside.

It’s hard to tell in this picture, but this dunk tank had the foulest clown this side of Pennywise. There was actually a sign up and to the left (from the picture’s perspective) that warned people that the clown could be offensive, and boy could he. As if it wasn’t bad enough that he looked like the clown guy from Slipknot, he also harangued the crowd mercilessly. When we walked by later that night he was even playing songs like “Baby Got Back” to make fun of some of the portlier members of the crowd and there was plenty of that going around. Luckily we stayed far enough away to avoid his insults, but I did get a good laugh out of him. This guy needs his own reality show.

The fair seemed to be unofficially sponsored by Batman and DC Comics. One of the big attractions was a Bat-Copter that seemed to be leaving for rides every five seconds and then hovering over the fairgrounds so you couldn’t hear and wreaking havoc on anyone with PTSD. There were also a slew of–I assume–unlicensed Batman toys, T-shirts and whatnot, but my favorite was this Human Bat with the Bat Signal in the background advertising one of two supposed freakshows.

As if you needed to be told this, the freakshows are wierd. Yeah, let that steep for a second. Of the group of us, four people went in. Two said it was a complete waste of time, that nothing was alive and half of it looked like papier-mache. Two others loved the not-completely-full jars of oddities. One time in college the missus took me into our school’s animal lab which was full of these things. Not cool. Felt like the beginning of a horror movie, so I bailed. I didn’t like how the two-headed goat was looking at me. 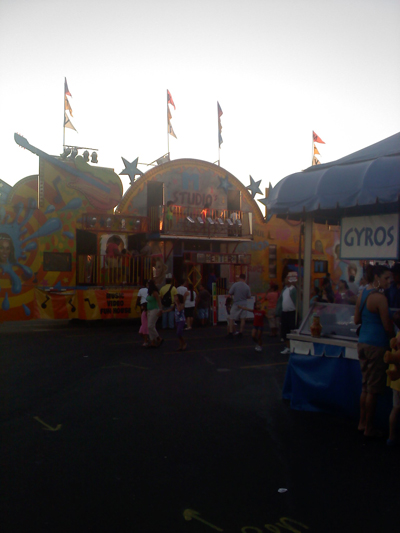 Gotta love these weird funhouse things the carnies put together. This one is called “MTV Studio’s.” I’m not sure why it’s possessive. We didn’t think you could go in there without a kid and frankly, I’m cheap and didn’t want to buy more tickets to go through something that looks far cooler on the outside than it could have on the inside. I wish the picture was better so you could see the terrible paintings of Lil Wayne and that guy that punched Rhiana and a slew of others that looked like no one in particular. 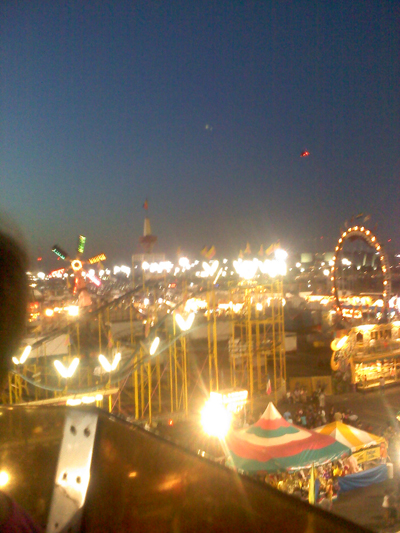 The one ride I actually went on was the Ferris Wheel with the missus, Rickey and Sam. Sam and I got a little nervous, especially when we got stopped at the very top, but it was a pretty rad view, as you can see above. The evening ended with lots of food, though none of us were brave enough to try the Doughnutburger. The evening ended with more fireworks and then we made the long trek back home. If you want to see even more pics check out my buddy Agent_M’s Tumblr.

On the actual 4th we spent a nice day at the house of some family friends who invited us over for a pool party and then spent today trying not to die in the intense heat, so it was a great weekend all over! Thanks to everyone who made it awesome!

3 thoughts on “Fourth Of July Funtimes”