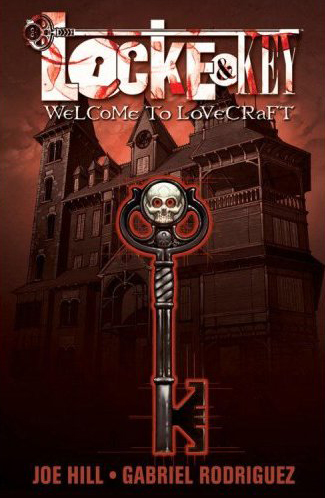 LOCKE & KEY VOLUME 1: WELCOME TO LOVECRAFT (IDW)
Written by Joe Hill, drawn by Gabriel Rodriguez
Collects Locke & Key #1-6
I was still working for Wizard when Lock & Key was first announced. As the IDW contact, I was usually first in the office to know about the upcoming projects. Something by Stephen King’s kid didn’t interest me all that much, so I missed out on the book and after our initial round of coverage, I kind of forgot about it. Then, in an unexpected move, the Totally Rad Show guys reviewed the book towards the end of last year very favorably and it got me interested in checking it out again (you can see the episode, #144, here). A few months ago, Barnes and Noble had a big trade sale and Locke & Key was one of the potential books so I picked it up along with Wolverine Weapon X, making this a bit of a themed Trade Post.

It really is a great book, the TRS guys were right. It’s about a family that moves to Lovecraft, MA after the father is murdered by one of his guidance councilees. But, as it would turn out, this is no ordinary house. It’s filled with secrets, from the door that allows the youngest son to fly around as a ghost to the wraith trapped in a well, many of which are opened by keys found throughout the house.

Things stay bad for the family as it turns out their dad’s killer is still around and is being helped out by a mysterious entity, which brings terror back into their lives. Hill really weaves a hell of a story that deals with all kinds of elements, from basic family dynamics both before and after the violent act, to how each member deals with those changes and on to the more mystical aspects like the keys and doors and monsters and killers. It’s really, really well put together, with some world building that makes me want to read more and more stories set in said world, which is good because there’s already two other trades out called Head Games and Crown Of Shadows which I want to get my hands on.

I kind of touched on it above, but I want to once again commend Hill for building a story so well from the ground up. Often times with a story like this, the action is really well thought out or the mystical aspects are, but it doesn’t always fit well together. In this case, all the elements are there and it makes for a great ride that’s enhanced by Rodriguez’s animated-but-still-dark-when-it-needs-to-be art. This one’s definitely recommended to everyone and will be getting a spot on my shelf. Give it a whirl and see how it plays.

WOLVERINE: WEAPON X (Marvel)
Written and drawn by Barry Windsor-Smith
Collects Marvel Comics Presents #72-84
I’ve been disappointed with just about every classic X-Men story I’ve ever read, mostly because a good chunk of them are written by Chris Claremont and I find his writing overly wordy and generally boring (plus, it’s hard to get excited about stories you’ve seen retold a million times in other comics, flashbacks, Rosencrantz and Guildenstern-like yarns, movies, cartoons, video games, trading cards and what have you). Weapon X wasn’t even one of the stories I had on my “must read” list, but when it turned up for only a few bucks on the B&N site, I figured I’d give it a shot.

It was alright, but not great. Part of the problem was that I read the intro by Larry Hama before reading the book. Usually, these are interesting bits with some information or examples of how the work inspired the writer, but in this case, Hama hyped the book so much (sometimes incorrectly) that I found myself comparing his intro to the actual product and mentally pointing out the incongruities like a smarmy teenager with a teacher who mispronounces a president or something.

Don’t get me wrong, it’s not a bad story. It’s actually pretty interesting and the art is fantastic. I also didn’t find myself bored, which I was worried about considering my earlier problems with classic X-books. The plot’s a pot boiler because you know Wolverine will be breaking out in the end and killing some dudes (just look at the cover), so you’re just waiting to see how and when. It’s like in the beginning of Jason X where the military guys have Jason all chained up and they’re making fun of him and throwing an old blanket over him or whatever and you’re just waiting for him to bust out and do his slice and dice routine. It’s not a matter of if, but when. In this case, however, you’re not waiting for a known monster (all we know is that he’s a dangerous soldier, going by just this story), but a man who’s been experimented on and turned into a weapon by government jackasses.

I like how the story is collected too. They turn the whole thing into one continuous story which is followed up by all the MCP Weapon X-centric covers (the anthology comic was a flip book with a cover on each side), covers from previous collections, the aforementioned Hama intro, a W-S Wolvy pin-up, a story W-S did in Wolverine #166 set during this story and the cover he did for the next issue. I like that kind of extra effort put into a collection.

So, in the end, I’m glad I read this important piece of Wolverine’s history. I like the character enough (how can you not, unless you’re violently opposed to overexposure or, well, violence?) and I like that the story passes the test of time (again, the art is RAD), but I don’t think I’ll be keeping this one on my shelf. If you’re interested in checking it out, it’s up on my Swap page!