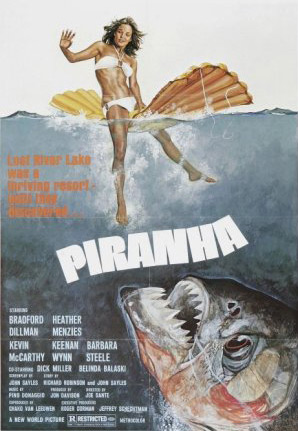 While watching the excellent new version of Piranha from Shout Factory’s Roger Corman’s Cult Classics series, I was pretty excited. I had never seen the movie before, though it started feeling familiar at a certain point which is when I remembered seeing what I thought was the original on TV a few years back and it turned out to be a 90s TV version. Luckily I quit watching that one so my viewing of the original turned out to be a 97% original experience.

Here’s what the movie’s about. A couple 20 somethings go hiking and find what looks like a water treatment place and go swimming. They die. A reporter comes out to find out what happened to them and comes across a local recluse and the pair of them discover that the government had been experimenting on weaponizing piranhas to take out enemies in the Vietnam jungles years ago. They’re trying to warn everyone, especially as the mutant piranhas head to both the recluse’s daughter’s summer camp and a lake where tons of teenagers hang out and have drunken fun (it’s like two horror movies in one!).

Going in, I was worried that the flick would wind up just being a lame Jaws rip-off (to be fair, I think that of any movie about monsters in the water), but they reference Jaws so hilariously in the beginning with the use of a video game that I had already given the movie a pass it didn’t need because, as far as I’m concerned, the difference in plot and execution separated this film enough from the classic, which probably isn’t too surprising when you realize this was one of Joe Dante’s earliest films (Gremlins is awesome). Sure it’s got a vacation spot ruled by a guy in a goody suit (played by the awesome Dick Miller (Walter from Corman’s amazing Bucket of Blood and Murray Futterman from Gremlins) in danger of being put on hold thanks to rabid sea creatures, but there’s so much else going on before it gets to that part that it doesn’t matter (at least to me).

The effects, which let’s be honest is the reason a lot of people will check a movie like this out, are pretty great too. There’s a weird scene with a land-walking fish creature in the lab that doesn’t really play much of a roll in the film but looks pretty good (he’s composed using stop motion) and the kills look pretty good (though it’s hard to do the ol’ “water and blood bubbling up from the water” trick wrong). The crappy inserts of fish painted on a background zooming around only seem to add character to the movie even though they look pretty lame.

My favorite scene in the movie is when the dude is skiing behind the boat with a girl driving and another one spotting (watching the skier to see if he falls or wants to go faster, slower or stop). Now, I grew up on a lake and learned how to ski at a pretty young age and I’ve done my fair of both slaloming and spotting and I can tell you that the scariest part of the movie was how inattentive the spotter was and how ridiculously fast the driver was going. That guy was getting yanked around like crazy and then the spotter chick tells the driver to go faster when the skier makes wild hand gestures. For the record, as I learned it, the universal symbols while skiing are thumbs up for faster, thumbs down for slower and flat hand across the neck for cut it (like a pirate threatening to cut your head off). We also devised a signal where you tap the top of your head and then your back for “head back.” Had this guy gone over the signals before going out and not been randomly pointing in the air (or not gone with a pair of women who clearly have no value for his life) maybe they wouldn’t have cut the engine in the middle of lake only to offer a tantalizing treat to the piranhas. Thus ends the skier safety portion of the blog post.

I haven’t gone through all the extra features on the DVD yet, though thanks to my new found love of the flick, I’m sure I will, so the rewatch value here’s pretty good. Plus, if nothing else, this movie feels like a really good primer for Piranha 3D which I’m super duper excited about (I keep telling myself I will absolutely positively go see this 3D flick in the theater after missing My Bloody Valentine). So, do yourself a favor and check out this new presentation of the movie out, I think you’ll dig it.