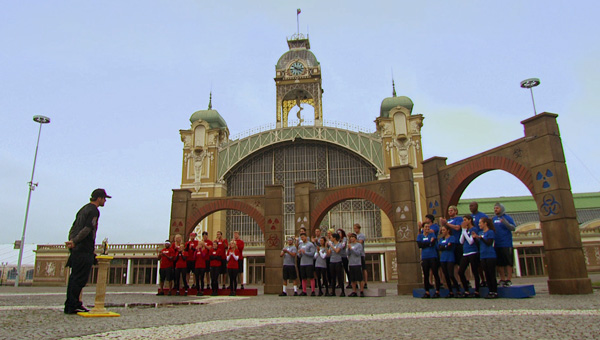 It took me a while to figure out where to start with this week’s post about The Challenge. Last time, I went through the basics of the game, then the challenge, followed by the Gulag and finally the drama of the episode, but I think I’m going to have to go more chronological this time around as the drama stuff works its way into the challenge and Gulag portions of the episode. But before jumping all the way in, holy crap the intro for this season is long, boring and stupid. I missed it last weekend, but seeing each of the 30 original players get out of some kind of vehicle is just dumb. 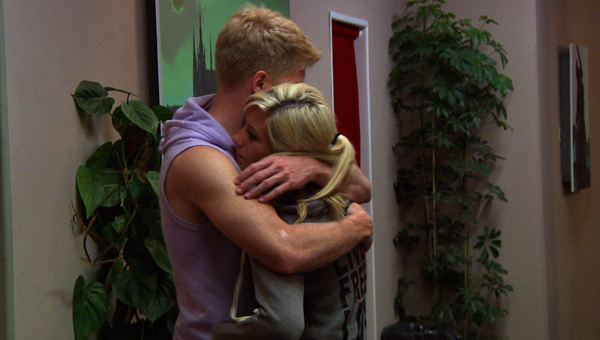 Before the teams are supposed to start fighting, we’re told that Abram and Cara Maria have a thing for each other. We got a little taste of this last week, when they did their weird warpaint schtick. Anyway, Cara Maria talks about the scratches they’ve given each other, but we’ll get to more of that at the end. On the flipside, Chet (love him) and Mandi seem to be having a little thing going. Out of nowhere Laurel starts giving Mandi shit though for supposedly hooking up with Chet when the two were upstairs. This seems to come out of nowhere and is completely unprovoked, but Chet jumps to Mandi’s defense and gets some good burns in on Laurel who tells the camera she’s trying to get inside Mandi’s head. Here’s my take on the whole thing: Laurel’s an asshole who drinks too much. When she drinks too much she starts messing with people for no reason. She might also be an asshole who just wants more screen time. I’m not sure about that, but every time we’ve seen her making fun of another contestant, she’s wasted. Just look at this preview clip from next week where she lays into Big Easy seemingly for just walking over to the hot tub. Here’s the other thing, calling one of the chicks on these shows a slut for hooking up with someone is like saying a football player likes getting hit. Sure it’s not true for all of them, but odds are it’s a statement that applies to the majority. 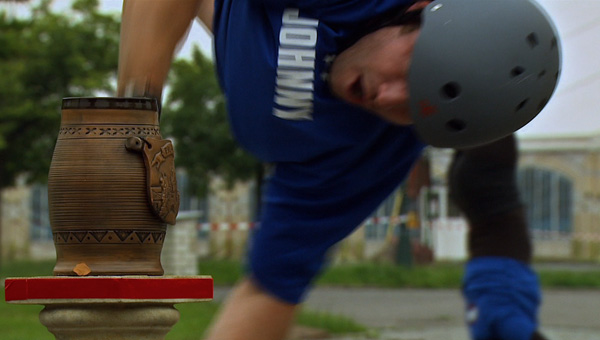 Eventually we do get to the actual challenge which is called Brain Busters. Eight of the contestants are hung from their legs in two rows. At the end of each row is a pair of color coated pedestals with beer steins on them. The idea is to get the steins from one pedestal to the other by swinging back and forth and passing them to your teammates in a certain amount of time. It seems fairly simple, but was apparently much more complicated. With Red and Gray having 10 people on each team, they had to make two people sit out. Abram and Shauvon sat out for Gray while Mandi and Camila sat out for Red. 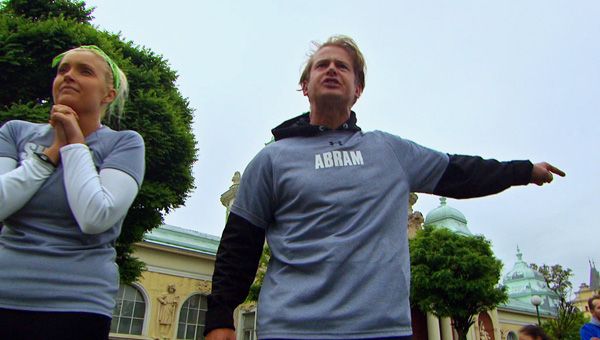 Since Gray won the previous challenge, they got to choose the order which turned out to be Red, Blue and finally Gray. Red didn’t do so hot, only getting one stein across. Then, while Blue started doing their thing, Abram pulled the Gray team aside to work on strategy. Abe’s idea for sitting out was that he would help coach them from the sidelines, but that didn’t turn out so well. Blue got all four across with a few minutes to spare. Then, Gray went and it turned out that Abe’s plan didn’t work so well in execution as it did in paper. Like, at all. Of course, he spent the whole time screaming like a football coach which just lead Blue lead by Johnny to hoot and holler the whole time. As you might expect, Blue took home the victory. 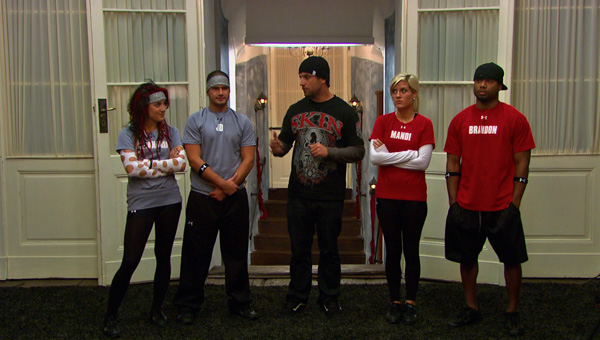 So, as Blue went back to their nice looking dinner, the other two teams were left with deciding who to vote in. Abram offers to be thrown in for his team because he screwed up the plan, but his teammates have other people in mind who didn’t seem to do much of anything. Then we got the montage of people voting without getting a clear idea of who would get sent, but for a minute I thought it might come down to an Abram vs. Dunbar Gulag which would have been pretty epic. Personally, I would have voted Abram in so he could easily take out a member of the other team, but I can see not wanting to risk your best player. As it turned out Brandon got voted in again which he’s not too happy about because the team keeps feeding him lines about unity when in reality it’s just people looking out for their friends, but Dunbar did get a good number of votes, so hopefully he’s watching his back. Far more dramatic was the Red vote for the female because Chet voted for Mandi. He straight up told the camera and later some of his teammates that he did it to show them that he wasn’t emotionally attached and he was there for the money. Cold, but decisive bro. For the Gray team, JD and Cara Maria got voted in for not doing their part in the challenge. Hilariously, Cara Maria told the camera she was bummed out that people were voting for her because she had one bad challenge. Hey chick, not only are you a rookie, but one bad challenge is all it takes to get thrown in.

There’s a pretty funny moment where Mandi asks Chet if he voted for her, saying that she heard he did. He doesn’t say that’s the case, but we all know it is. It makes me wonder how honest people are about telling other people who they voted for. I would lie my ass off to everyone involved to get closer to that green. 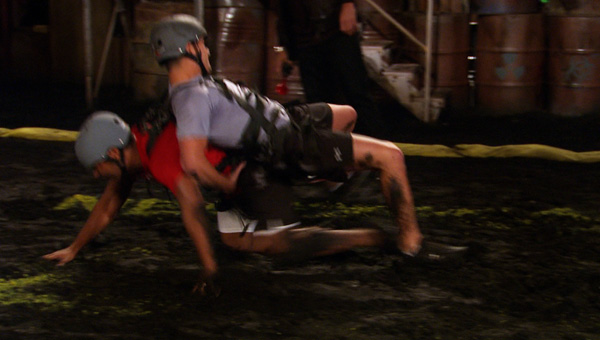 The Gulag itself was surprisingly straightforward with the contestants tied to each other back to back with a barrel in front of each of them. The idea is to drag the other person to your barrel and knock it over. The match-ups were pretty uneven so it should come as no surprise that Brandon easily carried JD on his back like a baby and that Cara Maria didn’t have too much trouble dragging Mandi across the dirt. I’m still not a fan of TJ Lavin or his increased number of insults flung at the contestants. Not that they need coddling, but who are you to say anything? Back at the house Brandon’s pissed with his team some more while Abram and Cara Maria go outside to get down, breaking a hammock in the process. They then move into the bathroom and we get to see the scratches on Abe’s back. Damn. 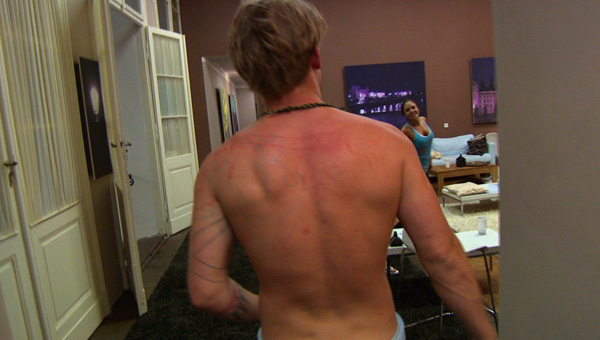 Overall it was a fairly solid episode. I don’t care much about Abe and Cara Maria, partially because I don’t remember CM ad partly because Abe said something like “I’m not married yet,” which seemed like a weird and potentially slimy thing to say. Does he have a fiance back home waiting for him? He said he wasn’t married anymore in the previous episode, I believe, so it seemed like a strange thing to say. I like Chet, so seeing him learn to play the game early is good because it means he might stick around a little longer. Mostly I’m curious to see how the usual bag of tricks that these masterminds bring to the game play out this time around. With the secret vote to see who goes into the Gulag, you can talk a great game to peoples faces and then just go do whatever you want to do and not really have to deal with it. How hard is it to cast suspicion on someone else? Next week’s challenge with some kind of giant leap over water looks awesome, but I’m not looking forward to another Laurel outburst. One of the OG broads in that house need to set her straight.