Hope everyone survived Thanksgiving. It’s been a few days since I was able to do one of these, so some of these links might be old, so bare with me (or is it “bear” neither make much sense).

I’m pouring one out for Leslie Nielsen and one for Irvin Kirshner, two people who had profound influences on me growing up through their movies. George Lucas had some really nice things to say about Kirshner over at StarWars.com. 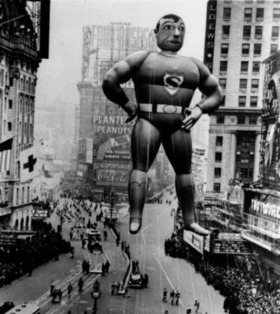 Whoa, check out the weirdness that was the original Superman Thanksgiving Day parade balloon that Only The Young Die Young showed off this week.

Am I the only one who thinks that Joss Whedon comes off a little douchey in this E post where reacts to the news of the new Buffy movie? Specifically this quote “This is a sad, sad reflection on our times, when people must feed off the carcasses of beloved stories from their youths—just because they can’t think of an original idea of their own, like I did with my Avengers idea that I made up myself.” Claiming to have made up an Avengers story yourself seems a little misleading considering the movie is not only based on existing characters but also movie versions of characters who have already been established.

Dan Hipp does it again with his Jem piece.

Jason Geyer’s Ottertorial over on AFi about long lost Secret Wars toys that never were wasn’t only fascinating on it’s own, but also for the bevy of links I’m still making my way through in the first paragraph. Highly recommended for toy fans! 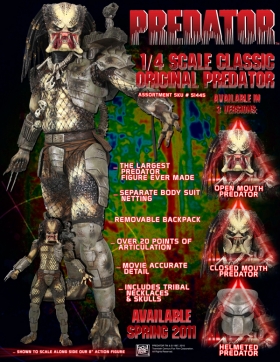 One thing I learned while working at ToyFare is that, while Predator toys are cool, coming up with something about new figures is tough because, let’s face it, most people haven’t liked a Predator movie since the original. Anyway, NECA’s latest 1/4 scale Predator kind of gave me goosebumps with how rad it is. (via Toynewsi)

As if I wasn’t already jealous enough of my buddy Kiel for being the best comics reporter in the biz, now I had to add him talking to Kevin Smith to the list of other things I’m envious of. Check out his article about Kevin Smith’s Green Hornet comic for Dynamite over on CBR. Though I generally don’t care about Green Hornet aside from Bruce Lee’s involvement in the TV show, I’m pretty curious about this series and will hopefully check it out in trade. 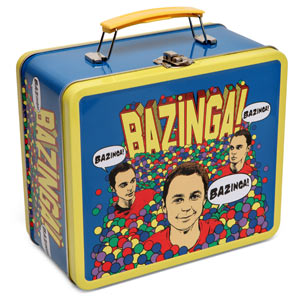 I did a list over on Topless Robot about five Image comics that should get made into TV shows and five that shouldn’t in the wake of Walking Dead’s popularity.

I can’t believe The Beat spent entire month of teasers on ONE book from Image. That’s crazytown.

I Heart Chaos posted pics of Cybermen walking around London. I think I would have punched one and ran away screaming.

I’d be happy to never hear about the Spider-Man musical again. That is all.

And finally, go check out my buddy Sean Collins’ web comic, newly colored, over on DestructorComics.com.