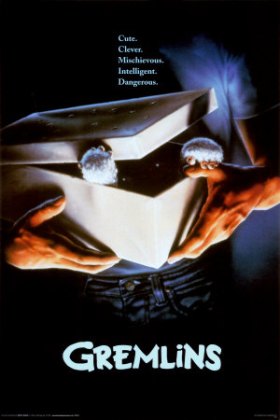 I haven’t been doing as many Christmas Stories this year because, frankly, I burned through pretty much all of the regular Christmas movies we watch in last year’s posts. But that doesn’t mean there aren’t more great Christmas themed movies, TV specials and CDs out there for me to talk about, like Gremlins for instance. Joe Dante’s classic is one of those on-a-pedestal movies that thankfully holds up from my childhood. I remember watching this flick on TV whenever it would come on and was a huge fan of the sequel, which doesn’t hold up nearly as well, but was clearly kid candy with all the different kinds of Gremlins. When I think about Gremlins, I don’t think about it as a a horror movie or a Christmas movie or a sci-fi flick, it’s just Gremlins, this perfect, offbeat amalgamation of all those elements.

It had been a while since I watched the movie all the way through. I think I started it last Christmas but fell asleep or something and didn’t get back to finishing, but man, I was incredibly impressed this time through. The movie is SO GOOD and uses the holiday setting as well if not better than John Carpenter did with Halloween. From the story and performances to the special effects, which still look awesome even 26 years later, this movie has it all.

I mentioned above that the movie is offbeat, which is something I really noticed on this most recent viewing. Even though there’s so many horror elements from Billy’s mom kicking Gremlin ass in her kitchen to the asshole cops who won’t believe our hero because his story sounds crazy, I never think of it as just a horror movie. I think that’s because the music is so whimsical at times. You also can’t discount the absolute cuteness of Gizmo, both of which turn even gory moments like Billy’s mom shoving a Gremlin into the microwave where it explodes, seem not as gross as a similar scene in a different movie. I’ve read the Chris Columbus’ original draft of the movie was a lot darker and more violent, but I’m really glad that Dante reined it in a little bit to make it something unique: a Christmas-themed horror movie that the whole family can enjoy.

And how great is the cast in this movie? Zach Galligan nails the regular guy hero role. I know Fast Times fans will disagree with me, but Phoebe Cates will always be the adorable yet deeply damaged Kate. The way she tells the story about her dad is insane. It’s a ridiculous story, but she sells it like Billy’s dad wishes he could sell, well, anything. Speaking of which, Hoyt Axton and Francis Lee McCain as his parents are so great. She the long suffering wife of a dream and he the dreamer trying to make things work. This movie introduced me to the amazing Dick Miller and possibly Corey Feldman as well (can’t remember if I saw this, Goonies or The Burbs first). After poking around the IMDb page I also discovered that Transformers voice actors Frank Welker and Peter Cullen helped voice the Mogwai and Gremlins to go along with Howie Mandel as Gizmo (which I knew).

Speaking of firsts, I believe this is the first movie with rules that I remember, which might make it one of the earliest bits of geek memorization in my life. Then again, who doesn’t know that you can’t feed a Mogwai after midnight, get them wet or put them in the sunlight? I wonder if learning those rules and wondering who created them and thinking about a place where Mogwai are just running all over the place living their lives like squirrels helped fuel my imagination as a kid. Even just thinking about that last bit paints a picture of an epic battle in my head between two sides of the same coin with the Mogwai trying to defeat the Gremlins, many of which are their siblings and family members. It’s pretty intense.

While Gremlins might not be what you think of when you think of a traditional holiday movie, it contains all the hallmarks. You’ve got lots of decorations, a family overcoming adversity, a man trying to follow his dreams and people realizing how important other people are in their lives. Now onto the sequel!