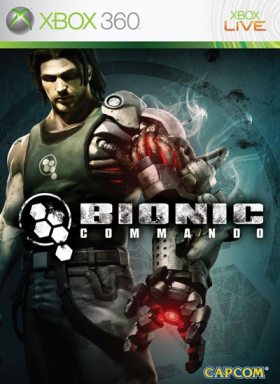 I never owned the original Bionic Commando for Nintendo, but I was a fan of it. I think as a kid, there wasn’t a single property with a grappling hook that I wasn’t a huge fan of. In addition to BC, you’ve also got C.O.P.S. and, well, Batman, I guess? Anyway, even though I hadn’t heard particularly stellar reviews about the 360 version of the game, I still figured I’d give it a shot when I saw it at Game Stop for under ten bucks. Overall? It wasn’t a great game, but there was something about it that kept making me coming back. There are lots and lots of problems with this game. The swinging mechanic is never better than even the worst Spider-Man game you can imagine and doesn’t get anywhere near one of my all time favorite games Spider-Man 2 for the PS2. Also, unlike that game, there aren’t a lot of things you can do with that awesome bionic arm of yours. There’s a couple moves and you acquire a few more as you go, but nothing all too impressive or fun. The fighting mechanic also seems weird. How come some douchebag henchman you’re facing can kill you with two punches? That’s super frustrating. Also frustrating is the way the weapons work in the game. You’re always stuck with this shitty semi-automatic gun even though there are some rad shotguns, rocket launchers and machine guns lying around, but you can only carry one of those at a time. I get that they’re trying to go for realism for some reason (like the physics of swinging which can my amazingly frustrating) but you’re got a giant metal arm, why can’t you carry two good guns?

The complaints do not stop there. The ending is pretty lame. First you’ve got to face off against this asshole who’s also got some cybernetic parts. I had to look up how to beat him on YouTube and instead of straight-up fighting him, you’ve got to grapple him at a ridiculously precise moment. After that, you swing around some more right before a series of QuickTime events which is weird and out of place because you don’t deal with those throughout the rest of the game. I don’t get that weird change.

Like with most games, I skipped as much of the story as possible, but this time I finally verbalized why I do that when it comes to video games. See, the whole point of a video game is to PLAY IT. I don’t care what the set up is, especially the longer it takes for you to explain it to me. It would be like going to play football and having someone explain the history between two random people on your teams. You don’t give a shit, you just want to play the game. That’s me with every video game. I assume the story is going to be stupid or unnecessary so why bother watching these cut scenes when I just want to get to the punching and shooting.

At the end of the day, I’d love to see a sequel to this game that’s done maybe by the Spider-Man 2 people or possibly the original Crackdown dudes. An open-world set up without all that radiation nonsense, better swinging, fighting and weapon mechanisc and this could be a big huge hit, but I doubt anyone cares anymore at this point which is too bad because it’s got potential. I wish beating the regular game opened up the redone version of the NES game they created, but that’s not the case. Bummer. Anyway, BC was a good enough time waster between the last game I finished and the Wolverine game I’ve been waiting to play for like two years at this point and will be next up on the playlist.