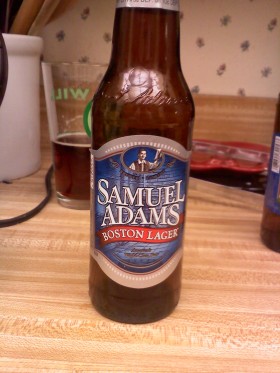 I’m become a fan of Samuel Adams. I never had anything against the brand of beer by any means, but they’ve really been winning me over with their sampler packs. This time around, I purchased the American Originals pack which seems to be a winter-themed set that includes Boston Lager, Scotch Ale, Irish Red, Revolutionary Rye Ale, Noble Pils and White Ale. The great thing about 12-packs with six different kinds of beer is that, if you wind up hating one or two, it’s not that big of a deal. I didn’t quite hate any of these beers, but there was one that I don’t ever want to drink again. I’ll start off with the basic Sam Adams brew Boston Lager. I don’t think I’m a big fan of lagers. They’re alright, have a bit of bitterness to them, but nothing too strong. I guess there’s just not enough there for me to either be offended by or really dig into. I don’t think I’ve ever ordered a Boston Lager out in a restaurant for that very reason. 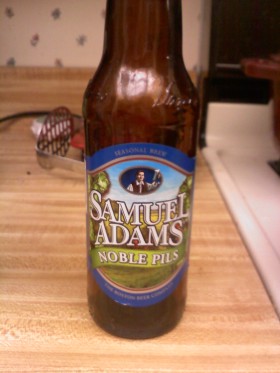 On the other hand, I have bought Sam Adams’ seasonal, though awkwardly named Noble Pils while out and about (actually at the wonderful Billie Joe’s Ribworks) after first having it in a multipack around Thanksgiving that I only reviewed a few beers from, including the White Ale which I still dig. Anyway, I was looking forward to the Noble Pils this time around and had even thought about picking up a 6- or 12-pack of them between first and second tastes. It’s got a tang mixed with a bitterness and some sweetness that I really enjoy. The first time around I didn’t think I’d dig this one, fearing it would be too bitter, but really, really liked it. I’d be in favor of Noble Pils sticking around for a while.

I was most excited to try the Revolutionary Rye Ale because it just sounded interesting and unique. I had no idea what a Rye Ale was supposed to taste like, but it seemed like something that might be new and different, especially since it’s based on an old recipe.It’s got a mild flavor with a bit of a bitter ending, but not too bitter. Seems to have a thickness to it when drinking it from a bottle. I don’t know what I was expecting from a Rye Ale, but this isn’t really it. The label says it’s got “light pine and citrus notes” but I don’t know if I’m tasting those. I can smell the citrus when I gave it a pre-drink sniff, but am only feeling a very basic, not very pronounced tingle on my tongue from it. Reminds me of another beer I’ve had recently that I can’t quite place. Maybe the Magic Hat Encore? After sitting out for a while, the citrus notes became a lot more prominent. I still have no idea what pine in beer is supposed to taste like though.

I saved the Irish Red for last because I’m pretty sure I’ve had it before and I’m a fan of other Irish reds like Killian’s or Smithwick’s. The Sam Adams version holds up pretty well against those big names in the game, but if I’m out in a bar or restaurant, I’m far more likely to get one of the other two more famous versions. It’s basically the same as trying another dry stout and digging it, but when you go out and want to drink one, you’re probably going to get a Guinness. 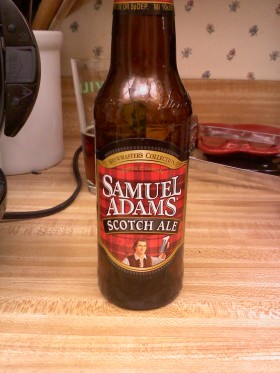 I’m really glad I saved the Irish Red for last because it was either that or the Scotch Ale and I really didn’t like that one, so I was able to end on a good note instead of a smokey one. It wasn’t nearly as bad as Magic Hat’s Howl, which I wound up throwing away I disliked it so much, but I am just not a fan of these smoke-flavored beers. I just don’t get why that’s a flavor you want to drink. I basically chugged both of these beers just to be done with them. I’m hoping this type of beer soon finds itself out of the mix in future samplers.