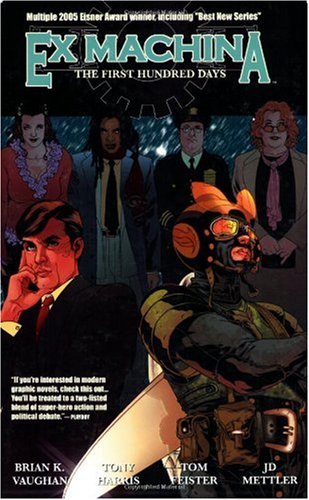 I’ve had a very on again, off again relationship with Brian K. Vaughan and Tony Harris’ political superhero adventure Ex Machina. Back when the first issue came out in 2004, I picked it up on a whim and the last page reveal that main character Mitchell Hundred’s superhero alter ego The Great Machine saved the second World Trade Center tower didn’t shock or intrigue me as much as it did lots of other people. I wasn’t hooked, so I didn’t bother getting the next issue. I think I got back into the book a few years later while at Wizard when I had access to the trades and recent issues, but I soon fell off the wagon when lateness became a huge issue. Over the years I’ve collected the trades and for my birthday this year, I got the last one I needed from my folks, so I figured it was time to read the entire series from beginning to end.

If you’re unfamiliar with the book, Ex Machina stars Hundred a man who was granted the ability to talk to machines thanks to a strange device that exploded all over him. For a while, he used those abilities as a vigilante called The Great Machine, but that was short lived. He decided to unmask and run for mayor of New York City as an independent, something he had no chance of winning until September 11th happened and he saved the second tower. The majority of the series revolves around Hundred as mayor and the various political hurdles he finds himself jumping which cover the gamut of hot button issues from gay marriage and religion to the enforcement of old laws and the legalization of marijuana, but with plenty of flashbacks to his time as the Great Machine. The series jumps around in time quite a bit and has a set up that feels similar to that of Lost–which I’m sure is one of the reasons he was tapped to work on the show for a brief time. I wonder if anyone online has figured out how to tell this story completely chronologically.

SPOILERS AHOY I had a pretty great time reading the series from beginning to just before the end, which frankly I’m still not sure about. I get the feeling from reading this all together and having read some of Vaughan’s other comics like the glorious Y: The Last Man and Doctor Strange: The Oath that he just ran out of steam and possibly interest when it came to Ex Machina and, as a result, just rushed the ending. After building this huge story interweaving superheroics and politics all of which had this looming mystery about where Hundred’s powers came from and why other people seemed to get different variations on his abilities for 9 volumes, the 10th just seems rushed and anti-climactic. I have no problem with the idea that a dimension hopping group created the machine that gave Hundred his powers or the idea that Hundred defied his program and wound up saving his world, but the finale had a “is that it?” quality to it. Making matters worse, it felt like Vaughan was hinting at a much bigger, crazier story that Hundred was preparing himself for as he became Vice President, as if he needed to be in a seat of power in order to save the world from future invasions (or to usher one in) which actually sounds like a more interesting story than the ending I was given.

It’s all the more disappointing when remembering how moving the end of Y: The Last Man was. Not everyone got a happy ending (Ampersand’s almost made me tear up), but they were all treated with respect and they all made sense. That wasn’t the case with Ex Machina. Hundred killed one friend and another professed his love for him (which was completely out of no where) and everything just ends on a shit note. Harris’ usually fantastic art even suffers in these last few issues, which makes it all the worse. The usually robust panels look flat and have a strange effect on them that looks like Tom Goes To The Mayor episodes, which is not a good thing in my book. Harris is the rare artist who started off with one style that I really dug on Starman and completely changed his style in something else I really like and yet, like his partner, he couldn’t end on the same high notes he began on. 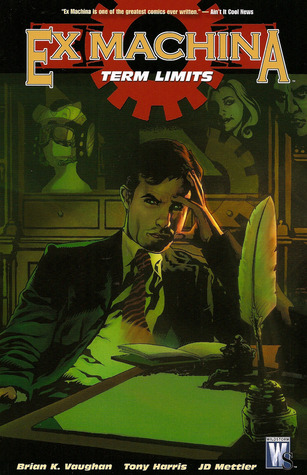 Something I’ve come to realize over my years of talking about stories is that, for me, “disappointing” is a much worse designation than “bad.” Something that’s bad, is just bad and that’s it, but something that’s disappointing had my interest and some investment from me and didn’t deliver. It’s like a creative betrayal, but probably shouldn’t be so dramatic. In the case of Ex Machina, the book won me over even after not being too blown away by the first issue so many years ago and a shitty production schedule knocked me back off the ongoing and then completely failed when it came to the ending. The real question I ask myself after I read a trade is “Does this go on the shelf or up for Swap?” My initial feeling after finishing the last book was “dump this junk,” but I’m a little more conflicted. Is this an ending that I will never like or is it the kind of thing that, now that I know how it ends, I’ll know it’s coming and it won’t be so disappointing? It’s a tough call because I dig so much of this comic leading up to ending. It’s such a careful, well-plotted story with plenty of political and social ideas that really took center stage, a good amount of logical superhero moments and even a great mythology that seemed so deliberately paced and revealed that the hurried up ending stings even more. I think I’ll keep the books for now, but instead of the shelf, they’ll go into one of my spill-over long boxes filled with trades that can’t fit on the shelf right now to be read another day when shelf space is more plentiful.