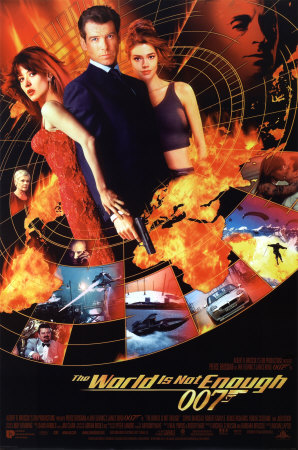 For the most part, The World Is Not Enough is a fantastic entry in the James Bond series. Bond kicks major ass at times, beds some beautiful broads, goes through a crazy boat chase early on, a return to excellent ski chases and rescues a capture M while fighting a dude who can feel no pain as a bullet lodges itself further into his brain. The only problem? Denise Richards as (sigh) nuclear scientist Christmas Jones. She’s awful. She looks confused throughout most of the flick and you’ve probably seen kindergarten plays with more convincing line delivery. In a series that has had voice dubbing in one form or another for most of it’s history, I’m kind of shocked that someone with actual timing hasn’t brought in to make her performance less terrible. I wonder if that was ever up for consideration. I apologize to Tonya Roberts for comparing her character in A View To A Kill to Richards’. Roberts looks like freaking Meryl Streep compared to Richards. Heck, anyone does.

While Richards might be the worst part of the movie, the actual villain of the piece SPOILER happens to be Sophie Marceau’s Elektra King which makes her the very first female main bad guy in the Bond series. She’s trying to blow up some pipelines so the pipeline she owns will be the only way to get oil from some place somewhere. It’s not super important because, like I said, there’s a boat chase in this movie that’s amazing.

The movie also does a few things that reference the series’ history. First all, the title is taken from Bond’s family crest as revealed in On Her Majesty’s Secret Service. The second and more emotional one is Desmond Llewelyn’s exit from the film series which honestly almost brought a tear to me eye. What a classy way for him to go out. Replacing him with John Cleese was a good move, I especially like how unimpressed he is with Bond and his antics. Making things even sadder is that Llewelyn passed away thanks to a car accident. I didn’t remember this from the time and figure it was from natural causes. Man what a bummer.