I was pretty jazzed about seeing Sucker Punch. I dig Zack Snyder as a director for the most part, with 300 and Watchmen being part of my DVD collection, plus the kitchen sink feel of the movie with everything from giant mechs and steampunk zombies to gorgeous ladies and guns really made me curious. Aside from the trailers, I tried to avoid pretty much everything said about the movie because I was really curious how it was all going to fit together. I’m not sure how I feel about the finished product. I think it will get compared to Inception because both are action films operating on several levels of reality, but I do not think Sucker Punch holds up nearly as well as Inception. I’m going to take a similar approach to this review as it’s nearly impossible to talk about this movie without getting into spoiler territory. There will be three levels of spoilers in the review: conceptual, story and ending, each will be labeled with caps at the beginning. Dive in as deep as you want.

CONCEPTUAL SPOILERS I went into this flick knowing that most of the wild action was taking place in our heroine Baby Doll’s mind. I’ve got no problem with that and it certainly helps explain the genre cocktail that makes up a good chunk of this movie. As I mentioned, there’s three levels at work in the movie. You’ve got the real world (which is still a pretty stylized, time-lost one, but you get the idea), a world where the inmates of the asylum Baby Doll finds herself in imagining themselves as dancers/prostitutes and the battleground world filled with robots and zombies. The border between CONCEPTUAL and STORY SPOILERS gets a little blurry here, so let’s assume the following is a little bit of both. Baby Doll is locked up in the asylum, Real World world switches to the Dancer World pretty quickly without bouncing back and forth until the end. It’s while in Dancer World that Baby Doll goes inside herself where a guy dubbed Wise Man on IMDb explains five key things she’ll need to get out of there (this also happens to be Battle World). While in her head in what I’ll call Battle World, Baby Doll is doing some apparently amazing dancing in Dancer World. The items she needs are pretty basic and ones we’ve seen in either Real or Dancer world.

STORY SPOILERS In Real World, it’s explained that a shrink played by Carla Gugino uses theater-like tactics to get the inmates to deal with their pasts. So, it might seem like the whole Dancer World  set-up is supposed to be the girls (or maybe just one girl) working through their issues. In Dancer World the scumbag who runs the asylum runs a club and keeps the girls there. Instead of theater therapy, they go through dance class, but they still have to perform chores around the place.

STORY SPOILERS The problem I have with this world jumping is that they don’t seem to be super related to one another. Even when one of the other girls (Sweat Pea, Blondie, Rocket and Blondie) is doing the swiping of the item in Dancer World, Baby tends to take center stage in Battle World. There’s a real lack of correlation between the two worlds that left me feeling flat. I love seeing hot chicks blasting steampunk zombies as much as the next guy, and I think the creativity put into the Battle World set-ups is pretty fantastic (ie, they’re not JUST zombies, but they’re steam-powered Nazi-ish zombies), but another problem is that the movie gets kind of formulaic and patterned, which gets a little boring, even with the kick ass action. They need something, Baby Doll dances in Dancer World, the girls kick ass in Battle World, they get it in Dancer World and they move on. Things get really crazy at the end of the movie, which cuts off the repetition, but I’m still on the fence as to whether the end makes up for it. 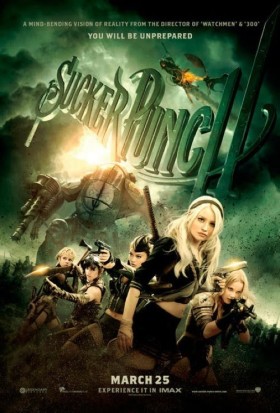 ENDING SPOILERS Things get pretty nuts in the last third or so of the movie. Plans fall through, bad things happen and even worse things happen to the girls. I didn’t feel a lot of tension during this part of the movie because I was a little bored by the repetition, but the surprises were still pretty surprising. There’s a very strange flip at the end that tries to make you buy that SUPER SPOILERS the story is really about Sweet Pea. This came out of left field for me and doesn’t really make sense, especially when you consider that Baby Doll is not only our entryway into the world but also the very clear hero of the entire thing. I guess it’s possible that, since we see Sweet Pea on the stage in the Real World that we jump into her brain from here on out, but I’m not convinced. There’s some voiceover stuff in the beginning and end about guardian angels and dragons, but it didn’t land with me. I was impressed with how sad the ending is (voiceover not included). Things do not end well for these girls, which is kind of surprising for a big almost summer action movie. Maybe things will make more sense on a second viewing, but I’m not jumping at the chance to do so.

It’s too bad that the varying realities didn’t really match up and the ending didn’t land with me because, this flick kicks off incredibly well. Snyder introduces us to Baby Doll, shows us how wronged she really was and places her in the asylum all with very little dialog. He keeps the interesting stylistic choices going throughout the movie, from a shot the pans from one side of a bank of mirrors to the other (took me a minute to realize the trickery here and I have no idea how he did it) to the reflective shots of the girls kicking robot ass, everything about this movie screams “feast for the eyes.” The CGI gets a little obvious at times, but those moments were quick enough for me that they didn’t stick in my craw too much. I think this review came off as a little more negative than my actual reaction to the movie, but things aren’t marinating with me well. Why would all the girls think they were dancers? Are their Battle World get-ups supposed to say something about their characters? If so, I’m not seeing them. I was definitely left disappointed by the story, but I’m not completely writing it off. I’m open to interpretations and theories. Anyone got one?