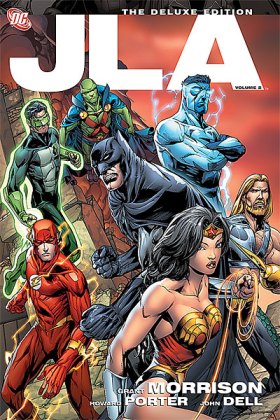 JLA DELUXE EDITION VOLUME 2 (DC)
Written by Grant Morrison, drawn by Howard Porter with Val Semeiks, Arnie Jorgensen, Gary Frank & Greg Land
Collects JLA #10-17, Faces of Evil: Prometheus #1, JLA/WildC.A.T.S. #1
As with the previous volume, I was once again surprised with how much Morrison packed into so few issues. I remembered the Injustice Gang story, the one where GL, Aquaman and Flash travel to Wonderworld and then to a possible future where Darkseid has taken over, but did not realize they were all happening at the same time. This is one helluva yarn to unravel and that’s before we even get to the Prometheus story. Wow, so much going on here. All other comic book writers–especially ones who want to write big time superhero team comics–should take notes for reference instead of throwing out yet another boring retread of old villains without much new thought or spark.

While a group of super villains coming together to put an end to the heroes might not have been the most original idea of all time–and seems even less so after the past few years of that being the go-to plot for villains–Morrison twisted it just enough by putting Lex Luthor in charge and having him use hostile takeover (read: business) tactics to destroy the JLA. He also, thankfully, didn’t just go with whatever Super Powers lame-os that seemingly everyone else who does this story. I fully expected to see Cheetah instead of Circe, but Circe makes so much more sense. As it turns out, the Injustice Gang series acts as a kind of book end for the other stories I mentioned. Kyle Rayner really gets to shine in an issue before Morrison moves the spotlight over to Aquaman. He does such a good job of giving everyone their due diligence.

But, my favorite aspect of this story is the Darkseid Is possible future. I am a sucker for these kinds of stories because they really get to play with our heroes in ways that just can’t be done in modern comics. Superman’s dead, Batman has been forced to kill, Flash is a fat guy, GL’s a zombie, but more interestingly, Argent has become a hero! Most of you might not remember Argent, but she was one of the characters in Dan Jurgens’ relaunch of the team in the late 90s. Seeing a guy like Morrison show her in such a cool light made me really re-think that character and reinforced the idea in me that there are no bad characters just bad takes on them. Apparently, no one else was paying attention because she hasn’t done much since Devin Grayson’s Titans book (I think).

And then the JLA disbands…but not really. It was a hokey trick that didn’t need to be there. Besides, it wound up just being a restructuring that brought in new members. And you know what? Morrison didn’t put the team together by having our heroes looking at pictures and weighing their options or all meeting up by happenstance and deciding to join forces, THEY WERE JUST THERE! I’d like those potential super hero team writers to take note of this too. We don’t need to see how the team is put together. It’s boring. Just put them together and if questions arise (or better yet, if mysteries abound) answer them as you go. I don’t want to see how next season’s Steelers come together, I want to see them play football! Wow, I’m punchy today, but I think it’s because this stuff all seems to basic and obvious and yet we’re inundated by boring and bad team books all the time.

Anyway, we’re introduced to a brand new villain named Prometheus thanks to his one-shot that then carries right into the next issue that introduces the new team. Prometheus might be one of the greatest villains of the 90s with his ability to download everything from building schematics to marital arts moves into his brain, but I do have one question, how did he get their moves on camera, especially Batman? Ah well, maybe he used his Cosmic Key. Like Zauriel, Prometheus has been mostly mishandled, but I think he could use an upgrade and come out swinging. He had the one-shot not too long ago, has he appeared since? The whole “he doesn’t have VILLAINS programmed in his brain” conclusion is a little Silver Agey, but wound up being fun anyway. I’m still not clear if Catwoman being there was her own idea or Batman’s but that sure was good luck if not planned.

The book ends with a comic I’ve never read before, but enjoyed: JLA/WildC.A.T.S.. I’ve gone on record several times as being a fan of the Wildstorm Universe, so seeing the ‘Cats interact with the Big Seven and written by one of my favorite comic writers is a treat. However, this book won’t blow you away. It’s kind of your standard inter-company crossover, but with Morrison’s crazy brain working on the reasons why they’re crossing over. Even so, I’m glad it’s included in the book to make sure everything he did with the team is collected.

Reading this book not only made me want to get the other two volumes of the JLA Deluxe series, but also get all of the DC 1 Million issues and read the whole thing as one big epic. It would be nice if DC put something together with all the one-shots in the correct chronological order with the main miniseries, but since I haven’t heard anything about that, maybe I’ll just put my own together and bind that shiz up. I’m going to keep my eye out for them as the con season heats up and will maybe get to them after getting my Justice League collection bound.