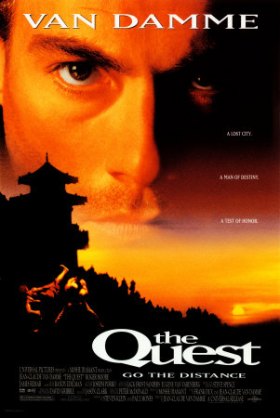 When I tune into an action movie, I’m not looking for a whole lot. In fact, the one and only thing I expect are some killer fight scenes. Dialog, sets, story and the like are all secondary and unexpected, so when they do come into play and don’t suck, I’m usually surprised. That’s what separates a movie with good action scenes from a good action movie. So, I was kind of surprised to see so much mud being flung at Jean-Claude Van Damme’s The Quest on IMDb. What exactly were you expecting? Heck, I was expecting very little and I was impressed.

Instead of the umpteenth “man pushed to his limits who starts pushing back…with his fists” movie, this one takes the tournament route. On top of that, it’s set in the 1920s, something that isn’t necessarily well-executed, but the effort is there and I think that counts for a lot. When you see 20s NYC, it looks like the set of a movie, but it’s still cool that they went for it instead of setting it in modern day which would have been a lot easier.

The story itself, of course, revolves around JCVD, a French immigrant in NYC who winds up getting sold into slavery by Roger Moore while a big martial arts tournament is being devised. He’s not involved with that in the beginning–the US representative is James Remar (The Warriors, Dexter), an old timey boxer–but eventually gets involved. The tournament itself is a pretty familiar set up, especially if you read Matt Fraction and Ed Brubaker’s excellent run on Iron Fist, with reps from all different countries–though mysteriously the continent of Africa only gets one dude–meeting in a mystical city and beating the crap out of each other until only one is standing.

I am a big fan of the tournament story. It works in pretty much every milieu and genre from video games (every fighting game ever) and movies (Best Of The Best) to comics (Iron Fist as well as Connor Hawke: Dragon’s Blood) and TV (Dragonball Z). The beauty of the storytelling device is that you usually get to see the contenders in the beginning doing their thing, then follow the main character(s) as they make their journey to the tournie, then everyone fights everyone and finally the big showdown between the hero and whoever has been made out to be the bad guy. That’s essentially the structure of this movie as well, with a lady reporter thrown in for no real reason.

The action scenes in this flick are great. We start off with JCVD as an old man kicking some ass in a bar, then move to 20s NYC where JCVD is a street performer on stilts fighting Irish cops and then soon after he’s in the middle of a pirate fight. How can you not like this movie?! There’s some character stuff and whatnot here and there, Remar does an excellent job as always and we get to the tournament which is chockablock full of fights. They even did a few different styles here and there like muay thai and capoeira. There were a few bits of weirdness like the Scottish guy doing insane kicks (I assume they’re more punching guys, but what do I know?). And finally, the big battle at the end is worth the price of admission. A great brawler.

Don’t get me wrong, The Quest isn’t a long lost gem. It’s just a fun action movie. There’s anachronisms all over the place, unconvincing set design and absolutely no reason for that beginning scene of JCVD in modern day NYC, but who cares. I want action and I got it. Note that this is JCVD’s directorial debut and I think he did a pretty good job.