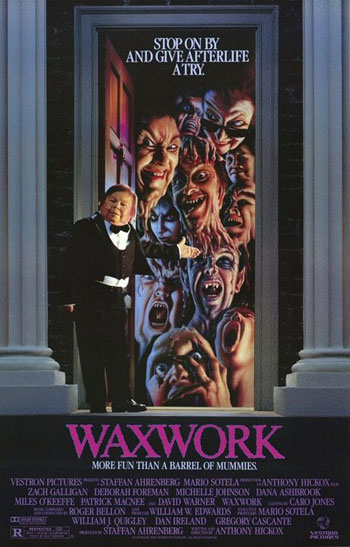 You ever watch a movie and turn it off partway through because it’s not really giving you what you want? That’s what my pal Rickey and I did a few years back when he came to my inlaws’ for Thanksgiving and we took full advantage of their On Demand free movie section. We put Waxwork on and figured it would just be a series of vignettes, kind of like an anthology, where these kids go into a spooky waxworks and wind up living out some version of a well-known horror story. That didn’t seem very interesting and as Rickey reminded me on Twitter, we were looking for gore, so we turned the thing off during an obvious Dracula take-off.

So, when I saw the movie was on Netflix Instant as well as its sequel, I figured I’d give it a watch yesterday. Not only were we wrong about the movie’s premise, but that boring vampire scene actually ended in a pretty damn bloody finale. As it turns out the movie is WAY more intricate than we assume. Not only do you get all the vignettes, but also something about the waxwork owner selling his soul to the devil and trying to capture people inside the displays in order to bring back the souls of 18 evil people whose artifacts he stole from the main guy’s grandfather.

When I say “intricate” I really mean confusing. I was watching Lucy, working and doing a few other things while watching this movie which meant I didn’t give it my full attention, as such, I didn’t catch all these details and had to look them up on Wiki. I looked up and they were out of the waxworks house and I had no idea what was going on, then I think I got caught up only to get confused again pretty soon after.

But, even though I didn’t catch it all, I can recognize that there’s a pretty interesting, maybe overcomplicated, but also fun and quirky movie in there that’s worth another look when I’ve got more time to really focus. The vignettes are pretty interesting and it’s fun to see different kinds of movies done in one flick but with an actual through line. Plus the battle at the very end is kind of amazing. If you’ve ever wanted to see an army of machete and axe-wielding villages attacking a group of monsters and villains that includes a slasher, vampire and other staples from horror movies, this is a good movie to see. It also stars Zach Galligan who I will always have an affinity for his role as Billy in Gremlins and Gremlins 2.