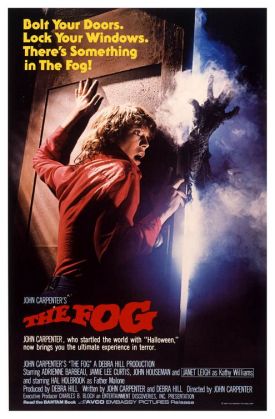 I don’t know what it is about The Fog that makes me not like it. It’s got a lot of things going for it that I love: vintage John Carpenter directing, some creepy villains and a cast that includes Jamie Lee Curtis, Tom Atkins, Janet Leigh, Adrienne Barbeau and Hal Holbrook.

And yet, even with so much potential, the movie just falls flat for me. And I think it’s because of the movie’s ending. But I’ll get to that in a minute and yes, there will be spoilers. This little town on the ocean is coming up on a big celebration of the founding fathers, while a glowy fog is coming up on the town. It first takes out a boat with some of Atikins’ friends on it. Since Atkins picked Curtis up as a hitchiker, she’s also along for the ride, but doesn’t serve much purpose. Then you’ve got Barbeau who is a DJ for a radio station that’s set in an old lighthouse. She’s supposed to represent the claustrophobic and alienating nature of the threat as well as the helpless feeling of being able to broadcast out on the radio but not hear anything back (the phone lines are down). There’s also Priest Holbrook who discovers how the sins of the town created the menage that they’re facing now and Leigh and her assistant (played by my favorite secondary character from Halloween) who are preparing for the festival.

All of that seems interesting enough, but for some reason there’s just nothing that grabs me and pulls me in. I can understand why the characters would be scared and what fears the filmmakers were playing off of, but I’m not internalizing that whatsoever. It’s all on the outside. And I think a lot of that comes down to the movie’s ending which SPOILER reveals that the things in the fog are zombie/ghost pirates. Huh? Okay. I can’t explain it, but I just don’t buy that. A supernatural killer psychically attached to his sister and trying to kill her? I’m in. A shape shifting alien in the ice? Let’s go on this ride together. Ghost pirates? Eh, no thanks. Also, the glowing effects they use throughout the movie just look goofy and don’t hold up at all.

So, maybe if you can get behind the ending or the premise or what have you, you might dig this flick. Me? I don’t think I’ll be giving it another shot in the near future unless someone lays out an interesting take on it that I can view it through. Anyone? How does the remake stack up? Since I wasn’t a fan of this one, I could see someone coming along and making improvements, but I don’t remember hearing much of anything about that one.