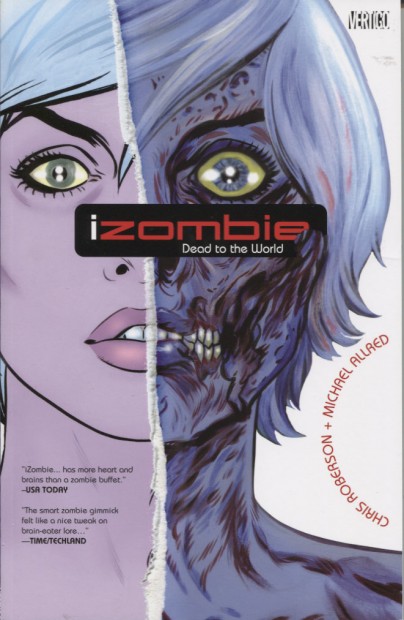 Back when I was still at Wizard, I remember reading the first issue of iZombie. I remember not getting very into it for some reason, but after recently getting the trade and giving it a read, I really dug the series.

The book stars Gwen, a single girl living in Eugene, Oregon whose friends happen to be the ghost of a girl who died in the 60s and a were-terrier. Oh, and she’s a zombie. Not your usual shambly, brain craving kind, but the kind who digs one up from the cemetery she works at/secretly lives in and absorbs memories from once a month. With those extra memories in there, Gwen feels the need to right any wrongs done to the person before their death. This time around, that leads to a man named John Amon who happens to be a mummy.

I won’t give away too much, but I thought the explanation for the various kinds of monsters–there’s also vampires, poltergeists and a few others–in relation to levels of the soul was pretty fascinating stuff. I don’t know if that’s been around before, but it was the first time I’d seen it. So many horror stories or stories set within the usual parameters of the genre skip over explanations that it’s nice to see one actually well thought out and explained clearly.

The story, which has a really good TV feel to it, is helped greatly by the artwork of Mike Allred. That guy’s just fantastic all around. I had really started to enjoy Madman before I left Wizard and haven’t gotten caught up since. While my initial thought is that I wish Allred was writing as well as drawing this project, I think Chris Roberson really helps ground things. Sometimes Allred get’s pretty darn heavy and out there and it can be difficult to follow. Roberson keeps things quick and clean and smart, which I like. I compared the story to a TV series above and I think that’s pretty accurate. There’s a lot going on in these issues, including Gwen’s main story, her time with John Amon, the were-terrier dealing with a friend discovering his true nature, a tribe of vampire women who feed on men at the paintball field they own and a pair of monster hunters. Everything seems really well balanced with peeks at other stories and background information to be seen and even the longterm and big decisions Gwen will have to face thanks to meeting John Amon.

By the time I was done reading the first volume of iZombie, I wanted to read the next and the next and the next. I want to know more about Gwen and how she became a zombie, what she’ll decide to do with Amon’s offer and also learn about all the other side characters a lot more. Too many stories kick off with an avalanche of back story before showing why certain characters are interesting and cool, I prefer this method which displays them as such and then will eventually explain more about them. More comics should be like that.