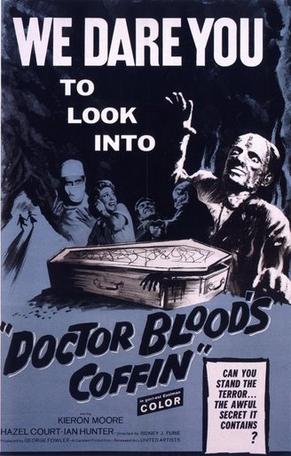 Doctor Blood’s Coffin is a strangely tricky movie. It spends a good deal of the first reel or so hiding the identity of the villain and then reveals it so nonchalantly I wasn’t sure if I was watching the actions of the actual killer or an incredibly obvious red herring. See, the story is set in an old mining town. It looked like Ireland or England, but most people speak with American accents, so who knows. People in the small town start going missing. The local cop is trying to figure out who’s doing it and asking the local doctor, who’s named Doctor Blood, though I didn’t realize that until much later in the film. In the middle of all this, Doctor Blood’s son, also a doctor, shows up. SPOILERS FOR A 50 YEAR OLD MOVIE FOLLOW.

On that first day, Dr. Blood Jr. grabs a piece of evidence to examine it and the cop is like “Whoa, dummy, we were hoping to get prints off that.” That’s when I realized he was the killer. Or was pretty sure. This is soon followed up by him offering to help the cops search the old mining tunnels. DBJ tells the cop to go down one tunnel while he goes down another and looks really surprised when he finds the killer/kidnapper’s lair. Then he runs up, meets the cop and says he didn’t find anything. So, he’s the killer.

The scene in the lair was actually pretty well done if you hadn’t already figured it out. From there it’s pretty standard as far as these things go. See, Doctor Blood Junior is trying to figure out how to negate death so that brilliant people–or at least people he deems as brilliant–can continue to live and help change the world for the better, even if it means killing some people in a small town to do so. We learn all this when he gets found out by the hot blond nurse that works for his dad finds him out. As it happens, she is very religious and thinks that the doctor’s playing God, which he shouldn’t because he’s not, you know, God.

The ending itself is a little hurried, but also pretty creepy as DBJ really tries to hurt the nurse, at least emotionally. It’s an interesting movie to experience, especially with that wacky reveal, but I don’t think there’s much here to really give a double thumbs-up over. It’s more of a shrug followed by “If you’re looking for something to watch on Netflix Instant and have already watched a lot of other movies, give this one whirl, I guess.”