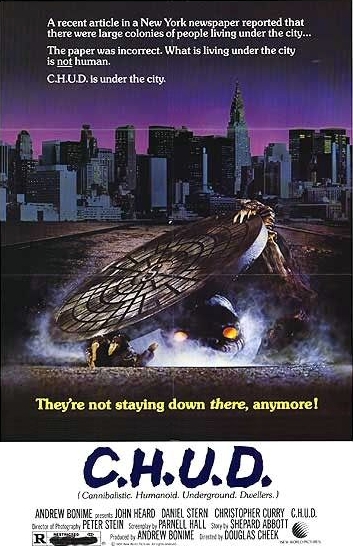 C.H.U.D.‘s one of those movies that I seem to have always been aware of. I remember seeing the VHS box while roaming the video store with my parents well before I actually got interested in horror. I remember seeing it on horror lists when I did get interested and also hearing the movie mentioned in Kevin Smith movies or maybe by the writer/director himself. But, I never saw it. I figured the movie was goofy because of the title and didn’t get around to seeing it until today.

So, I was pretty surprised when I started watching on Netflix Instant and the movie was actually pretty serious. Not overly serious and not taking itself too seriously, but this is not a corny movie. It’s about Cannibalistic Humanoid Underground Dwellers who live under New York City. The government is trying to cover it all up, but a photographer and a guy who runs a homeless shelter find out about them. As it turns out, the creatures are the result of an nuclear organization dumping waste in supposedly abandoned sewers and tunnels under the city. Some of the homeless people who live down there mutated and then fed off of their fellow homeless. With their food supply getting eaten up, the C.H.U.D.s soon take to the streets wreaking havoc.

It’s an interesting, though far fetched plot, that’s well executed by the cast and crew. John Heard plays the photographer and a young Daniel Stern the shelter guy. There’s also a cop who I could have sword was a young Ron Swanson from Parks & Recreation, but was not. They take their time to reveal the monsters and build some tension both personal and on a larger scale, keeping the monsters out of the movie until the last third or so.

And that’s kind of where the problem lies, the monsters. The design was pretty good, but you can see where the head piece attached to the body suit and I just couldn’t get past the yellow glowing eyes. It’s cool when they’re in the dark, but when it’s bright out, it just looks silly. But, I don’t hold that against them too much. Like I said, the movie’s pretty good and I’m also a sucker for any horror movie set in NYC, so I can forgive some less than great creature suits in favor of an overall solid flick.