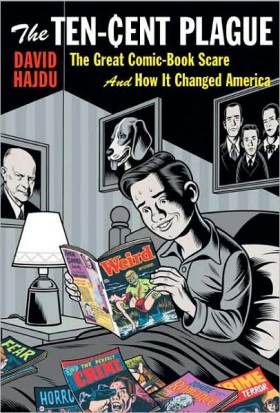 This is another one of those posts that have been kicking around in my head for a while. I actually finished the 10-disc audiobook version of David Hajdu’s The Ten-Cent Plague: The Great Comic-Book Scare And How It Changed America a few weeks back, but haven’t gotten around to talking about it until now. My inlaws actually brought me this set the day our daughter was born, I’m sure I thanked them and set it aside next to my bed for weeks without really realizing what it was. A month or two back I finally dug it out, noted the awesome Charles Burns cover, and decided to start listening to it while driving around in my car. My dad does this instead of listening to the radio and it seemed like a good idea, plus I knew that my wife wouldn’t have much interest in listening to the book while on our trips to either Ohio or New Hampshire, though I do think it would have been highly informative for her.

This is not my first foray into the history of comics. That honor goes to a tape about collecting comic books I bought as a kid hosted by Frank Gorshin that briefly went through the history of the medium, even talking to EC’s William Gaines in his cluttered office, an image forever burned in my brain. I haven’t read too many books on the subject, but have absorbed quite a bit over the years. Even so, I’ve never experienced anything as in depth and complete as Hajdu’s account. He starts off where most other accounts of comics does with the Yellow Kid and ends with the failure of EC after a series of government inquiries into the effects of comics on children.

What sets The Ten-Cent Plague apart from the other sources I’ve seen or read is the fact that he seemingly interviewed every living person possible. And I’m not just talking about the EC folks who do wind up taking center stage for the last third or quarter of the book (as they should considering what was going on), but also people who just worked in the biz. It gives the sense of a complete account or as complete as can be, though obviously no such thing could actually exist, especially so far away from the events themselves. I do think that, had I been reading this book instead of listening to it, I might have quit because it could be dry, but Rudnicki’s deep, commanding and lyrical voice kept me interested the whole time.

There were three things that really caught my attention while reading the book. First off, I didn’t realize how bad the comic book backlash was, especially in small towns. Places all over the country were rounding up comic books and just burning them. Book burning! In America! The small mindedness really got on my nerves. Second, how crazy is it that 60 years ago comics were such a big deal that the government was looking into them and the millions of copies they were selling while today it takes a complete overhaul of a major company to sell a tenth of that. Can you imagine that much attention being paid to comics today?

Finally, I tried to really think about where I would fall on the issues of the day back then. I’ve read some of the horror and sci-fi comics that EC was putting out as well as some Creepy and Eerie issues and a few other things. They were pretty gruesome, especially in a more sheltered time. Were I a kid back then and a fan of these comics, I would have been incensed that adults were starting to get in my business and take away my secret window into a more adult world. At the same time, if I were a parent at the time, I would probably do my best to keep them out of my younger child’s hands. Note, I’m not making a suggestion for governmental censorship, but censoring kids is kind of a parent’s whole job after keeping them alive is taken care of. Hopefully parents are in tune with their kids and understand what they can handle, but that’s up to them. It’s also up to the merchants to decide what they want to sell, but not the government’s to tell us what we can and can not create when it comes to art and entertainment, assuming no one is getting hurt in the creative process. I have lived my entire life in a world filled with ratings and warnings of content, though. Movies and comics had ratings and stamps of approval, records eventually got notices of questionable content and video games their own system of ratings. I’m used to these things and trust them to an extent. Ratings systems can be great if they are well maintained and keep to a set of public rules that everyone can read and understand. Unfortunately, that wasn’t the case back in the 50s and it lead to the end of a lot of great comics. Had things kept going the way companies like EC were going, we’d probably have a much different comic market now.

If you have any interest in comic book history, do yourself a favor and check Hajdu’s book out. I’d recommend hitting up the audiobook, but it’s worth consuming however you prefer.