I fully intended to give each Mission: Impossible movie it’s own blog post, but seeing as I’m busy with work and having trouble writing even one post a day, I guess I’ll just do the second and third sequels together. I realized while watching the second film–which like the first was pretty huge for me as a kid, I was 17 and in high school when it came out–something that was better expressed by Chris Nashawaty in his review of the first three movies for Entertainment Weekly: “Unlike the 007 films, each M:I flick reflects the man behind the camera.”

With a series of films that includes directors Brian De Palma, John Woo and J.J. Abrams (I haven’t seen Ghost Protocol, though I’ve heard good things) so, it’s kind of awesome that, while each movie fits in with the overall series, they also fit in as good examples of what makes each director unique. I has De Palma’s modern day Hitchcock references, II is clearly a Woo film with all kinds of implausable yet awesome fights and explosions and III practically looks like an episode of Alias with glimpses of what would come in Star Trek.

A funny thing about M:I II is that I believe it’s one of the first movies I watched where I realized it was filled with all kinds of ridiculous things  that couldn’t happen. I don’t remember if that was something that bothered me at the time (probably because I was something of a cynical kid). However, after watching plenty of other action movies, including Woo’s Hard Target, I’ve come to appreciate the spectacle. Not everything has to take place in the real world, you know? Plus, who knows exactly what the most highly trained and dangerous spies in the world can do. Maybe Ethan Hunt really can kick a gun in the sand so it shoots straight up and he can catch it. However shaky the basis in reality these things tend to be, I had a lot of fun watching Mission: Impossible II again. It’s fun revisiting these movies that were cultural touchstones of my youth, but not ones that I added to my own movie collection. I remember a LOT of this movie and I’ve only seen it a time or two. Fun stuff. 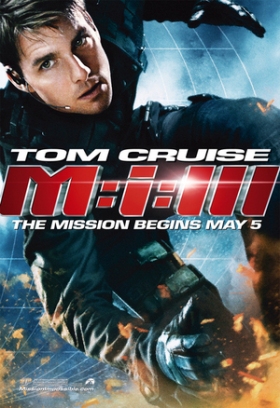 I also had fun watching Mission: Impossible III, though I didn’t the first time around. I can’t remember why, really. I think it might have had something to do with buying Philip Seymour Hoffman as a villain. For what it’s worth, I totally bought it this time around. I think having watched all of Alias actually helped this time around because this story could have easily taken place in the same universe. Heck, one of the locations looks a lot like Sydney’s house.

Anyway, like I said, I liked watching the film, but it’s only been about three or four days since I watched it and I don’t remember much about it aside from Hoffman being a lot creepier and more dangerous than I remember.

The one thing that did strike me about both of these movies is that Ethan Hunt falls in love to easily and that’s kind of annoying. I know in this one, he’s left the spy life behind, but you’d think spies would eventually learn that having a wife or a longtime love just will not work out. I know that aspect of humanity works in Hunt’s favor as far as people being interested in him, but don’t you just want him to be a complete badass? I do.

Having seen the first three movies, I’m actually all the more interested in seeing the new one. I’m curious to see what Brad Bird did in live action. I’ve never been conscious of an animated film director moving into the world of live action. I don’t know if a style would translate from one medium to the other, but if so, I’m sure a Pixar director could do it.