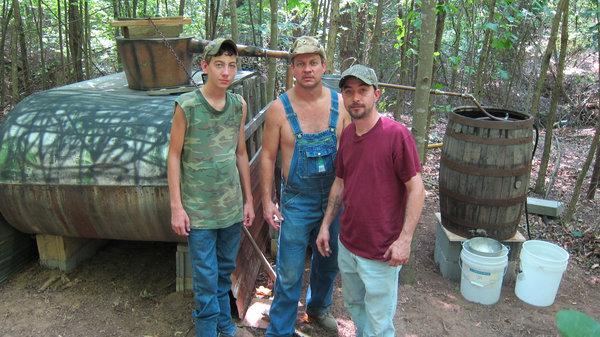 I’m not sure about you guys, but I was pretty fascinated by Discovery Channel’s six episode series Moonshiners. First off, being a fan of whiskey, I’m very curious about moonshine, especially because I’ve never had it. Does that mean I’m looking to head into the woods of West Virginia and buy a milk jug filled with mysterious clear liquid? No effing way. Say what you will about government regulation, but I have zero problem buying booze that has a 99 percent less chance of being laced with arsenic. Call me paranoid, but that’s because I am.

Anyway, the series followed three men whose lives revolve around the illegal practice of making high proof whiskey. On one side you had Tim, a moonshiner working overtime to try and go legit so he wouldn’t have to constantly worry about the law breathing down his neck. He enlisted the help of his teenage son and a friend and obvious drunk/meth head known as Tickle. The second star of sorts is Jesse an agent with the Bureau of Alcohol, Tobacco and Firearms whose job it is to find and punish moonshiners because they’re making illegal, potentially lethal booze, but more realistically because that booze would be taxed if it was sold legitimately (a fun drinking game is to take a shot every time the announcer man says the words “tax free”). Finally, there’s a third, much older moonshiner named Popcorn Sutton who looks to have been filmed with non professional equipment and is kind of oddly sandwiched in.

The men are pretty interesting, but I was more drawn in by the reasons the moonshiners gave for participating in an obviously illegal and dangerous activity. Tickle particularly says that it’s part of American history and should therefore be continued. He’s packed with the kind of rhetoric that could just as easily be used to defend drug dealing or slavery. I have a hard time believing he does it for any other reason beyond “It’s fun and it makes me money.” I was also fascinated by the idea that Tim and Tickle would allow themselves to be filmed like this. How is it possible to not get arrested at some point? There must be some kind of work-around or legal loophole, but all Jesse has to do is make note of this season and track down those guys. Bingo bango, right? Even if they move down the stream, that’s still a pretty good road map.

I gotta admit, the tension build up on the series was pretty amazing. First you see Tim and his son driving around creation trying to find the perfect spot to set up their still. Later, after visiting a legit still, he doubles his efforts to make the money it would take to go legal, which in and of itself is an interesting moral quandary that could be studied all on its own. Meanwhile, Jesse is almost constantly clomping through the woods at night only seen in night vision just about to stumble upon a working still. But, most of the paranoia and tension deflates as these people wind up not running into any real trouble. The closest things get to dicey is when Tim rolls onto a property and the man and woman show up with a shot gun and confront him. There’s a ton of chest puffery and talk of guns, but nothing happens.

That’s kind of the problem with watching something that, if it were written down would be an Elmore Leonard novel, but in reality turns out far less dramatic. All the elements for drama were there from Tim’s desire to rise above his standings and do right by his son to Jesse wanting to help his country and defend his fellow citizens. There’s even the mysterious and shifty Tickle who in the novel version would off Tim and wind up in a whole world of trouble. But unlike a story, the conflict in reality is basically just paranoia that doesn’t lead anywhere. This isn’t Crime And Punishment, they get paranoid, the paranoia passes and they move on. Tim and Tickle sell all the hooch. Jesse is never in any real danger (nor does he succeed in doing the interesting part of his job). We also find out thanks to the on screen text at the end of the show that Tim’s ensuing meeting with a group who wants to start a legit moonshining business doesn’t lead to anything. Perhaps that’s because he wore overalls on the private jet they set up for him.

The only story-like drama comes from the reveal of what happened to Popcorn Sutton. His inclusion in the series is odd considering the different look of the film and the complete disconnect between him and the other two characters. Why is he making this tape? What’s the point? Just because he’s a famous moonshiner doesn’t mean he’s famous enough that regular folks care. Well, it turns out there he got caught by the cops and was found guilty, but instead of serving his time, he offed himself. I’m still not clear as to when he filmed his stuff. He keeps talking about this being his last time making shine, but we don’t really know why. Was it because he was going to close up shop or because he knew he was going to kill himself? It’s not made clear by the show, but it’s a piece of information that could definitely paint those segments in a different way. I feel like Discovery included him because the rest of their season wound up being pretty boring and they needed some kind of end cap that actually had drama, conflict and maybe even a little tragedy depending on how you look at it.

At the end of the day, I enjoyed the series, though the finale was so drawn out and padded that I was certain nothing of substance would happen, which was true aside from the Popcorn stuff. If nothing else, it was an interesting look at how people can reconcile their actions and develop their entire lives around the idea that they’re doing the right thing for various personal moral reasons. These are the kinds of reality shows I find myself drawn to. These were real people doing real things that I’ve never done or experienced, so I appreciate the look into their lives. My real question, however, is how they will do second season. Will Tim return or will this be the Tickle show?