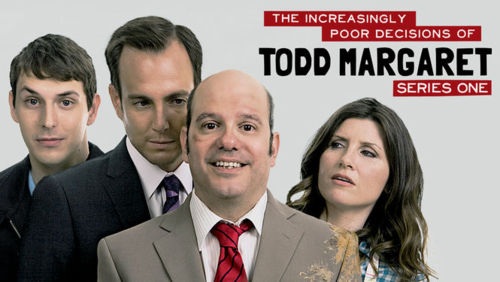 I haven’t done any reviews here on UnitedMonkee, but I think Arrested Development is one of the greatest pieces of anything ever. As such, I try to give everything and anything that the people involved in that show make a shot. Sometimes that’s great like Parenthood and sometimes it’s not so great like Will Arnett’s short-lived Running Wilde. It also introduced me to the genius of David Cross who I had seen here and there before but between AD and my much more stand-up savvy friends, I have developed a huge respect for Cross that has gone back to Mr. Show which I’m slowly making my way through on DVD.

Anyway, I had heard about IFC’s The Increasingly Poor Decisions Of Todd Margaret here and there and was excited when it popped up on the NetBox (that’s Netflix Instant on the Xbox, if you’re a newbie). Here’s the deal with the show, David Cross plays Todd Margaret a kind of useless wimp who works for a big company. His boss Will Arnett sends him to England to figure out how to sell Thunder Muscle, an energy drink. He shows up at a huge office that’s empty except for one young man named Dave who likes messing with the slightly pompous Todd. He also happens upon a restaurant run by the lovely Sharon Horgan who he falls for and tries to woo with less success each time. The title of the show, while long and a bit unwieldy, is completely spot on because all the trouble that Cross gets into falls solely on his own shoulders and his inability to tell the truth when backed into a corner.

There’s a really clever device at the beginning of each episode where a beat-up looking Todd sits in an English court with a judge reading off a laundry list of accusations–most of which spawn from the upcoming episode–and a group of lawyers or judges just yelling at him. We then cut back to whatever day we’re dealing with out of 12. It’s a great bit of business because it lets the viewer know that all these wacky events are actually leading up to something relatively big and serious.

If I had to compare Increasingly to any shows, I’d say it’s kind of a mix of the awkwardness of the UK Office or Extras and Louis CK’s Louie with a good dose of fish-out-of-water/arrogant-American-ness mixed in. I don’t compare it to Louie‘s honesty or autobiographic nature, but to the feeling I get that Cross is basically running this show exactly how he wants to.

At the end of the day it’s a fun show steeped in awkwardness that had me laughing and cringing at the same time. Those are jokes that can be hilarious or awful, but Cross and company do a good job of tempering them. I also appreciate that, while the show is a comedy first and foremost, there are also a good deal of mysteries that make me want to see the second series and not just the big one of what happens to Todd. What’s the deal with Dave? He’s clearly more than he seems to be. Also, how did Arnett get swindled? What’s the deal with all that? I’m jazzed to see how the series wraps up and hope to see the last six episodes on NetBox.