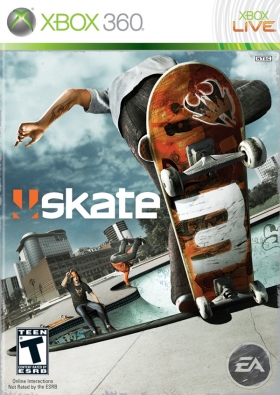 My video game habits greatly depend on how I’m feeling any given day, how lucky I’ve been in choosing cheap used games to play and whether I’ve decided to write or waste time with digital tasks to complete. I looked back and realized I haven’t talked about a video game since last summer, but I’ve still been playing, just not writing about them as much. I figured this would be a good way to catch up a bit.

One of the longest and best gaming experiences I had came from playing Skate 3. Skate 2 was a game I got sent for free way back in 2008 or 2009 when I worked at Wizard. Video game companies would send a bunch of games to the office every now and then and they’d get disseminated throughout the office. I was lucky enough to get a copy and even reviewed it on the old ToyFare blog, but that no longer exists and thus can not be referred to. So, I’ll summarize and say that I really liked the teleport function on the map, enjoyed getting better and better bit by bit at the various challenges and greatly appreciated the variety of said challenges. I did have some trouble getting the hang of some of the controls, but it wasn’t so bad.

I felt very much the same way about Skate 3. I haven’t played a lot of sequels to Xbox games I’ve enjoyed — Crackdown 2 is about the only one I can think of and that was a huge gigantic disappointment — but I’m glad they were able to keep the same quality, not mess with the difficulty level too much and still give me a game that lasted me quite a while and remained enjoyable the whole time. I even finished all the challenges but one and have even gone back to play a few things again when I’m bored or just want to have some fun flying through the air. I’ve never been a skater, but I like how this game makes me feel like I could possibly do it.

It looks like I didn’t actually write about the first Gears Of War game, but I did enjoy it. I can get a little tired of the whole “space soliders” game (yeah, I know they’re on Earth in GOW, but it’s the same idea), but they gave me just the right about of actual game to play without feeling too long or boring. It took me a while to the hang of whole duck-and-cover game play mechanic, but once I did things moved along pretty smoothly.

I had a very similar experience with GOW 2, making it the second 360 sequel in this post that I not only liked but had a lot of fun with. I don’t remember exactly how long it took me to finish the game, but I don’t think it was very long. Since I only pay around $20 for a game, I don’t mind if it doesn’t give me 60 hours of gameplay. It’d be different if I was paying $60, but I’m not, so I’m okay with a fun, quick and concise game.

There were some pretty intense moments and a few interesting boards. I didn’t have too much trouble with any of the levels or bad guys which I also like. I play these games to have fun and relieve stress, not challenge myself for days to kill one dumb alien. So far, GOW has been the series that I’m most excited about catching up on when it comes to 360 games, but only because I don’t think there’s going to be another Skate game in the near future.

I had a very similar experience with Madden 2011 that I did with Skate 2. I’ve been playing it for quite a while and enjoyed all the challenges therein. I played a few random games then started a franchise and won the Super Bowl after an undefeated season as the Steelers.

After that, I went and moved up to the next difficulty level. Man, there is a huge difference between the two. Like I said, I won every single game on one level, then could not win a game on the next. I’m not sure what the deal was. I could not complete a pass or get more than a few yards on the run. I was hoping for more of a challenge, but not the cold, hard realization that I might suck incredibly bad at this game.

So, what did I do? Instead of completely giving up and moving on to another game, noting that I had gotten plenty of fun out of whatever the used price was, I switched teams. To the Lions. I’m still undefeated with them, but it doesn’t feel like as much of a gimme because it’s the Lions and they hadn’t had their great season when this game was made. I know that’ silly, but it works for me.