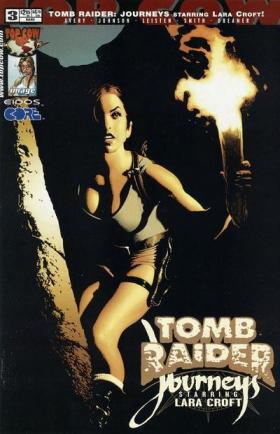 My most recent batch of random comics turned out to be surprisingly good, which was a nice treat. First up, I perused Tomb Raider Journeys Starring Lara Croft #3 from Top Cow. The book came out in 2002, was written by Fiona Kai Avery, and drawn by Drew Johnson and for a video game tie-in comic, it was a lot of fun. I don’t have a lot of experience with the Tomb Raider franchise, but I did play a few of the games for the original Playstation and enjoyed them as much as those blocky, awkward games can be enjoyed.

But the basic concept of a sexy, British lady version of Indiana Jones running around, finding treasure and being awesome is a wonderful (and broad enough) one that it actually makes perfect sense for the world of comics. This issue, which seems to be a one-off story (this is my first Tomb Raider comic, so I’m not sure about how Journeys fits in with whatever else was coming out at the time) where Lara takes a job that will allow a pair of archaeologists to prove whether a potential development site is the original location of Gomorrah or not.

The comic comes packed with some historical intrigue, a few fantasy elements (skeleton army!) and an interesting way of accomplishing her goal that isn’t super obvious, but best of all, it’s all told concisely in a single issue, something you don’t see much of these days. You need to know absolutely nothing about Croft aside from what’s right there in the title to enjoy this comic, but you also get the added bonus of Johnson’s somewhat angular artwork that reminded me of mosaics or stained glass at times. Are there other Tomb Raider comics or trades worth checking out?

Much like Web Of Spider-Man #81, which I read a few weeks back, Flash #88 (1994) written by Mark Waid and drawn by the amazing Mike Wieringo is an example not of a bad comic book story, but one I’ve read plenty of times in my comic reading career. In this case, the mostly carefree Wally West comes face to face (literally) with a woman who got injured while he was working to save other people. This snaps something in him and Flash spends much of the issue pushing himself way too hard to save as many people as possible. It’s the kind of issue where, while reading (and assuming you’ve experienced a story like this before) you get it after a few panels or pages, which makes flipping through the rest of them kind of boring.

But, they’re not THAT boring because damn if Wieringo wasn’t one of the best, most interesting and dynamic artists around. I haven’t read much of his run on Flash, just issues and trades here and there, but I think this is the first book I ever experienced his artwork on. He not only kills Wally (and all the emotions he goes through both in and out of the mask), but also puts the same amount of effort in the small army of normal folks found in this issue. Sure, I wish everyone in the book had cool powers or a fun costume so he could really show off, but you can really feel Wally’s sadness when he collapses in Linda’s arms at the end as well as the emotions flowing through the surrounding crowd.

As an added bonus, this book is jam packed with house ads for DC comics I was reading at the time and will make for a ton of fun Ad It Up posts!

Of the three books, the one I was least enthused about was Turok: Dinosaur Hunter #1 from Valiant (1993). I have not had great luck with the few Valiant issues I’ve read over the years (including Archer & Armstrong and Solar Man of the Atom issues from The Box) and know nothing about this property, but I wound up really enjoying this comic written by David Michelinie and drawn by Bart Sears.

I should note, that I had very little idea what was going on. Even though this is a number one issue, it is steeped (some might say mired) in whatever had just happened before this, which I think was the big Unity crossover that Valiant did around this time. However, even with a pretty low level of comprehension (they try to explain what’s going on, but I think it was all just too big to absorb as a new reader) I kept reading and had a fun time with a book about a Native American with a sci-fi bow hunting talking dinosaurs.

The comic is frontloaded with the continuity stuff, so once you’re done with that you can enjoy the story of a warrior finding a place he feels at home in for a while before his past catches up with him. It’s a standard part of the hero’s journey, but it’s told well and looks awesome as drawn by Bart Sears. I’ve mentioned before that the Valiant books were colored in a way I’m not as familiar with where it looks like they were finished with colored pencils or possibly water colors. That is done the best I’ve seen in this comic. I’d be very interested in reading more Turok comics by this team, any suggestions?