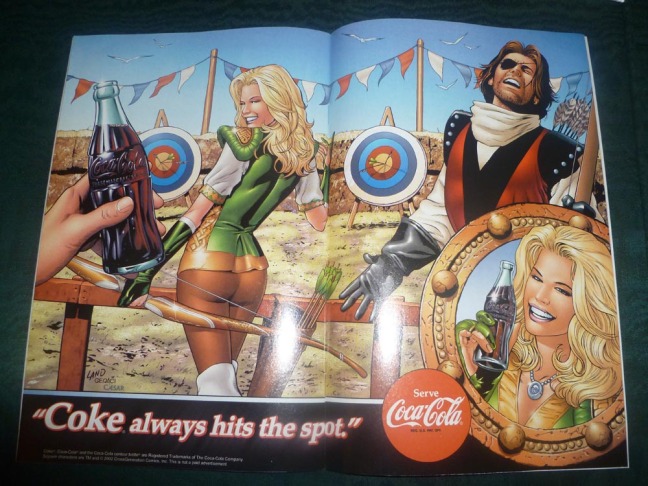 In addition to being surprised at how much I enjoyed randomly reading Meridian #22, I was equally surprised to spot this Coke ad in the back of the issue. That’s Arwyn, the star of the Crossgen comic Sojourn, I believe and the whole thing was drawn by Greg Land, who drew that book.  At first I thought the whole thing was a gag, but the small print seems to imply that this was an actual, official ad. I also thought it might have been art from the comic, which it might be, but that insert of Arwyn holding a bottle of Coca Cola sure looks like the real thing. Does anyone know anything more about this? It seems like a huge ad to get in the book, though I do believe Mark Alessi had a lot of money to work with at the time. Anyway, it’s still one of the cooler ads I’ve come across, especially because it actually uses one of the biggest artists around to show off the product. I don’t think readers would mind ads if more of them looked like this.