Like the last batch of random comics out of The Box, this one was 2/3rds great. I started off with the hilariously named and sure-to-get-some-interesting-Google-search-results Hawkeye: The High, Hard Shaft #1 (2003) by Fabian Nicieza and Stefano Raffaele, which I hadn’t heard about, but really enjoyed. There’s a type of superhero comic book story that I really like where we see some of our favorite heroes doing their thing out of costume and in the normal world. Ed Brubaker did some fun things along these lines in Daredevil and Nicieza does the same in this issue.

The comic finds Hawkeye traveling around on his bike and running into trouble with some locals. Well, he kind of inserts himself into trouble because he’s a rougeish hero, but you get the idea. Anyway, the comic has a kind of super-powered Road House feel to it as the guy who runs the town also has a few superpowered dudes on the payroll. The issue ends with Clint stocking up with gear at a sporting goods store seemingly ready to take care of things. Seeing as how I love Road House and those movies where the hero walks into a town run by a jerk and helps save the day.

The art didn’t really do it for me as it’s a little undefined and muddy. I get that they’re going for a noir-type feel, but I contend that that is a much more difficult thing to pull off in comics than artists or editors do. It’s not bad art, mind you, though there were a few times I wasn’t sure who I was reading about (the downside of reading out-of-costume superhero comics, I guess). At the end of the day, I really did enjoy this comic. I did a little looking around just now and it doens’t seem like these issues have been collected, so I guess I’ll have to look around for issues if I want to see how it ends (I bet he wins, but it turns out to be just a bit hollow). 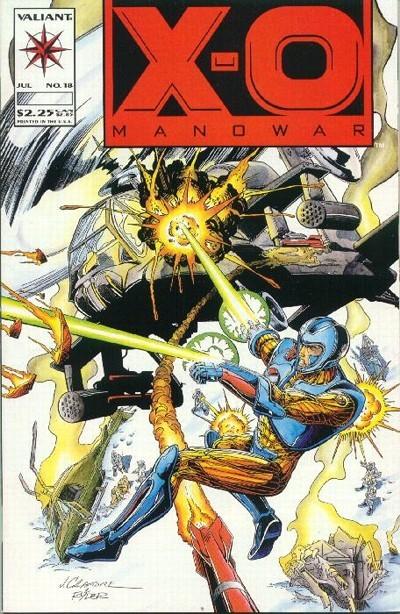 Unfortunately, Valiant’s X-O Manowar #18 (1993) by Jorge Gonzalez and Jim Calafiore was the book in this lot that didn’t really do it for me. The long and the short of it is that I had zero idea what was going on in this book and it doesn’t help that it’s the third part in a multipart story. I’m sure it’s important if you’re already a fan of the series, but if you’re a new person like I was, you’ll be mostly lost which is the problem I’ve had with every Valiant comic I’ve come across in The Box so far except last week’s Turok, but that was a first issue.

I do want to talk about the art a bit. I’m a big, big fan of Jim Calafiore’s artwork. He first came to my attention on Peter David’s Aquaman and had a really big effect on me as a comic reader. He was one of the first guys whose style I really noticed and liked. He has a kind of blocky angularity that still looks sleek that really appeals to me. However, in this book, that doesn’t really come through. I’m not sure if he just hadn’t developed his signature look by this point or if he was instructed to stick within the house style of Valiant at the time (which seems to be very basic, “realistic” depictions of people colored in a way that makes everything look a bit light). There were a few panels and faces here and there that I saw him peeking through, but otherwise, it wasn’t the Caliafiore I know and love. By the way, he’s a super nice guy in real life too.

The last comic I read for this week’s installment might have turned out to be the most surprising one in the batch. Crossgen’s Meridian #22 by Barbara Kesel and Andy Smith really surprised me by showing me a world that I really wanted to get invested in. The idea behind this book is that a world has flying pirates and that one girl–who has the Crossgen sigil–leads a group of good guys against marauders and other bad guys. I know there’s more to it than that, but that’s what I remember without going back and reading the entire thing. It actually reminded me a lot of Avatar: The Last Airbender where I was equally as interested in the characters as I was in the world.

This issue itself lets me in on some of the main character’s powers and explains some of her relationships. It’s a great taste of what’s going on. It also has a few ties to the larger Crossgen Universe which I obviously didn’t understand but it wasn’t overly distracting.

I liked the book so much, actually, that I ordered a few used copies of the first two trades from Amazon. I haven’t gotten into them just yet, but I look forward to when I’m done with a few other things I’m reading at the moment. That purchase makes Meridian officially the best reading experience of The Box as far as turning me on to something interesting that I otherwise wouldn’t have read. Thanks again to my pal Jesse for sending it to me!