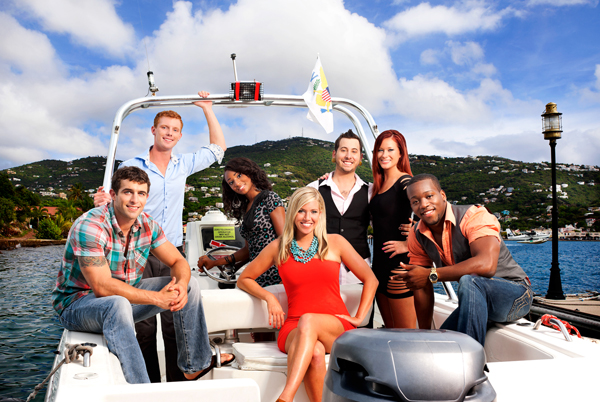 Well, after thinking it should have been on much sooner than it was, last night Real World returned with a brand new season, this time set in St. Thomas. We kick off meeting the cast members in an interesting way. You’ve got Marie, your prototypical Staten Island girl going to Robb’s very nice Pennsylvania home. She drops an F bomb when they discover that they both have Hakuna Matata tattoos and a clear bond is formed. At the same time sassy La Toya welcomes down home boy Trey into her house. The interesting thing about this season is that the kids were surprised with where they were going which I thought was interesting. Meanwhile, the trio of rich boy Swift, Southie-born and bred Brandon and bubbly Laura meet on the island and are the first ones to get to the house, which seems to be on the island.

Not a ton happens in this episode aside from the usual “who has a girlfriend/boyfriend” (none of them), who’s gay? (none of them), who used to be a heavy drug user up until six months ago? (Brandon). Plus all the meet and greet and roommate grabbing and, of course, drinking.

But there is something strange and dramatic going on. Would it be a Real World premiere if it wasn’t these days? Much like last season, one of the boys becomes instantly infatuated with one of the girls. In this case it’s Brandon falling for Laura. Being the one guy in the group who isn’t All American and fairly ripped, Brandon feels self conscious and immediately starts wondering how he can compete with these guys for Laura’s affections. It doesn’t help that she has a thing for Trey who reminds me of another former Real Worlder who I can not put my finger on. Anyway, after everyone starts drinking and Brandon sees Laura talking with Trey, a switch kind of flips and he gets super depressed. Does stripping down naked and jumping in the hot tub count as depressed? Because he did that and it was awkward.

Later he’s talking to Robb and it seems like another much more violent switch goes off, but he winds up letting Robb talk him down. Trey actually walked up to them while they were having this conversation and heard a bunch of it, but that stopped neither of them. Later he tells Laura what he heard and eventually brings it up to Brandon. By now, Brandon seems to have calmed down a bit and realized he was being way too crazy about a girl he doesn’t even really know that well. He apologized to Trey and they seemed cool.

Until later when Trey started reading Brandon’s notebook which he seemed to have left out on one of the outside tables (or at least that’s what Trey said). He showed some pretty strange stuff to Laura and Swift who seemed really concerned. I get where they’re coming from, but I also think it was super shitty to read the dude’s journal. It reminds me of a time in college where I wrote some depressing poetry or song lyric idea on a piece of paper that one of my roommates found. He talked to my girlfriend (now wife) about it and she mentioned it to me and I hardly remembered what I wrote because that’s the point of writing, the get your feelings out of you and onto paper. I’m hoping Brandon got the craziness out of his system and doesn’t spend the rest of the season being the obsessive weirdo he was presented as in this episode.

Other than that bit of drama, not a lot happened. They all got drunk and kind of paired off with Swift and La Toya talking, Trey and Laura and Robb and Marie leaving Brandon a bit out in the cold. Laura’s adopted and showed both Brandon and Trey letters her biological mom wrote her that she just got six months ago. I’m adopted myself and am always interested to see how other people deal with the experience and knowledge. Oh, Marie fell asleep first and the others wrote all over her and put peanut butter jars around while she was sleeping.

All in all, I thought this was a pretty good first episode. I was shocked to see how maturely Brandon handled himself (eventually). Sure, La Toya and Swift seem a little too cool for school and like they’re playing for the cameras a bit, but maybe they’ll prove to be alright. As long as this season doesn’t turn into Jersey Shore Virgin Islands, I’m good.