Regular readers and those of you who have discovered the site because of my Real World, Challenge and Jersey Shore posts, I apologize for not keeping up with my TV writing. One of the problems with being a work-from-home writer is that I spend most of the day on my couch with my laptop, so the last thing I really want to do in an evening is continue to sit on the couch with my laptop, take notes while watching and then write a post as fast as possible. But, I’m still watching and will probably get back into the swing with whatever the next Challenge is.

Anyway, like I said, I’ve been watching Real World St. Thomas and I must say I’m not very impressed. In fact, I’d venture to say that this might be one of the most boring casts of all time and a huge part of that revolves around the fact that the cast members seemed to pair off so quickly (or at least that’s the story that production wants us to experience). But I think things are finally starting to get interesting now that the pairs are showing cracks or starting to full-on break.I should note that I haven’t seen every episode and missed the first 15 minutes or so of last week’s, so my opinions might be way off.

My least favorite cast member as of now is Trey. I hate how he treats the women in his life, essentially doing bad things and then trying to get each of them to be the bad guy and break it off with him. His jealousy is also super ugly, verging on full on deplorable. He actually said in the previous episode something like “How could you say something like that to me when you know it makes me mad.” That does not sound good. At the same time, Laura needs to stick up for herself and become more of an actual person instead of a reflection of whoever she’s with. Hopefully she can learn that on the show.

Let’s see, I don’t have much to say about Robb and Marie. They’re just a couple of people who like to get wasted all the time, there’s not much interesting there aside from the fact that Robb clearly hates phones, his skull or both. That will be interesting to see where it goes. LaToya…eh, whatever, I haven’t seen a lot there either aside from pride and an inability to see things from another person’s perspective. I really didn’t like how she reacted to the time with Swift and the urchin, but I also despise when people laugh at other peoples’ pain. Brandon would be more interesting if he wasn’t such a sad sack. I know that’s mean to say about a recovering drug addict, but that’s how I’m calling this one. Lastly, I actually really like Swift. He seems like an upstanding dude. Sure he’s got a temper and gets in arguments, but I don’t get that violence-bubbling-under-the-surface vibe with him. I’m curious to see what happens with these kids, but not incredibly so. I’m good on not seeing the episodes I’ve seen so far. Who do you think will wind up on the Challenges? I’m guessing Rob, Trey and Marie with Trey being the only one who can legit compete, but we’ll see.

I’ve watched Bravo’s Million Dollar Listings (now dubbed LA to differentiate from the newly minted NYC version) since its inception. I’m convinced it should be retitled Rich Assholes Don’t Understand Real Estate, but that might alienate some people. I’m sure a lot of people get all slobbery over the drama between Madison, his former assistant Heather and Heather’s new boyfriend Josh Altman, but that’s not where my heart’s at. Sure, that’s juicy, but it’s not super interesting and it’s pretty clear that most of it’s based on misunderstanding, which is not something I enjoy watching.

I love this show for one reason: Josh Flagg. I used to hate this kid because he was so goofy, and, I’ll be honest, because I’m jealous of his wealth and success (pretty sure he’s younger than me). And, even though the producers have a penchant for putting clown music on in the background of his scenes, I think he’s by far the most interesting character here. Have you seen his office? It’s got this gigantic blue chair, a huge desk, enormous lamps and I want to say a pair of lions? It’s amazingly weird and that’s why I like Josh. At first I thought he was putting on a show, but I’ve learned from watching long enough that this is pretty much who he is. He’s the result of being brought up in a very rich family and actually finding the trappings of wealth very interesting. He’s essentially a 75 year old man from 20 years ago in a 20-something’s body. And that’s just weird enough for me to like. Give that dude and his boyfriend their own show and I’d watch. 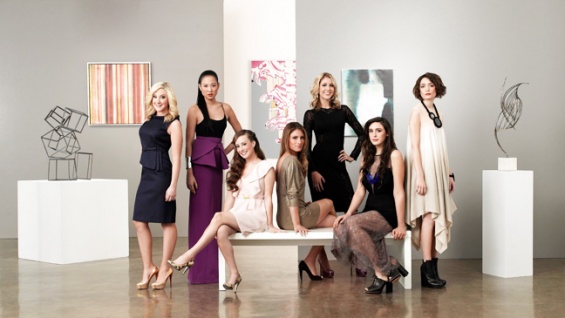 Shows like Bravo’s Gallery Girls very clearly let me know that I’m an old man. The series follows two groups of women working in the NYC art gallery scene, one located in Manhattan, the other in Brooklyn. It makes me feel old because I want to shake most of the Brooklyn women and tell them to grow up and stop playing into the hipster stereotypes so explicitly and want to high five the Manhattan women. Actually, now that I think of it, the only one of them I really liked after watching one episode was Liz, she works for the Manhattan gang and seems like a good hard worker. Plus, her dad is a renowned art collector who likes rolling into places in jeans and shirts, so she understands that it’s not about what you wear, but what kind of person you are (or at least how much money you have).

The Brooklyn ladies just drive me nuts. They’re actually starting their own gallery, which is no small task, I’m sure. However, only one of them seems worried about money and that’s because she borrowed $15Gs from her parents and has to pay it back in one year. One of the other women, the one on the far right in the above picture, had the gall to be like “I have $2,000 of my own money in this too” and blow off her financial concerns. SERIOUSLY?! I know artists can be difficult to work with, but my impression of this woman is that she clearly doesn’t care, just wants to MAKE ART (not money) and doesn’t care who she screws over so she can play gallery co-owner. Blech.

Had I seen this show when I was in high school and at the peak of my Daria-wannabe-ness, I wonder if I’d think more highly of these women. I’d like to think not, that I’ve always had a good head for business and a dislike of people who abuse those who do. Plus, the affectation of hipsterdom just drives me nuts. I get it, you like black “vintage” (read: thrift store) clothes, not doing anything with your hair and whatever red lipstick you find on the subway, it’s boring, it’s old and it’s unoriginal.