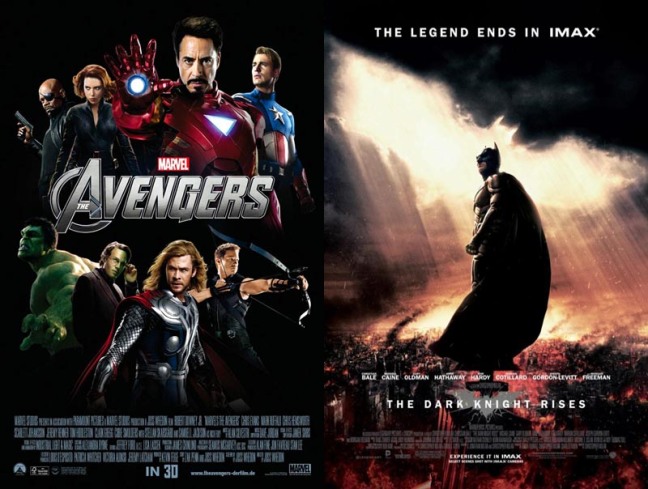 One of the hallmarks of the geek community is comparing things we love and seeing how they stack up. Of course, the problem with doing this is that we wind up comparing things that don’t even match up. Back when The Dark Knight came out the big question was whether it was better than Iron Man and I thought it was incredibly annoying. It’s like comparing Die Hard to The Usual Suspects, they’re both somewhat dramatic action films, but that’s where the comparisons end. One’s a balls-out auctioner while the other is a really serious, more cerebral outing…with punching and costumes.

The same thing happened this year when people started comparing The Avengers to The Dark Knight Rises and I thought it was an equally foolish comparison. However, while watching Avengers for the second time at the drive-in last night I realized a few things about the two movies that made me like one over the other and, seeing as how this is the internet, I figured I’d share them with whoever will read them.

Right off the bat (heh, PUN!), Avengers is more fun and a more enjoyable watching experience. It’s the perfect movie to check out on a Saturday or Sunday. It also has a lot of great moments that made me geek out, but I realized something while watching Avengers again. The moments in that movie that I dug the most (Iron Man reflecting his blasts off of Cap’s shield, Hulk sucker punching Thor after a team up) were great moments that reminded me of ideas from comics, but those same kind of things in Dark Knight Rises reminded me of specific moments from Batman comics. This is obviously completely subjective, but I can’t separate those very personal moments of awesomeness form my childhood, so why not embrace them? It doesn’t discount anything from Avengers, but just gives DKR a leg up in my book.

I know a lot of people thought DKR was bleak and sad, but I actually found it really uplifting. The character of John Blake completely embodies the never-give-up attitude that’s kept humanity alive for all these centuries. That same attitude is something Batman had to rediscover and use to his advantage to save the city he loves. There’s some of that in Avengers, but I never really thought they’d be in trouble. That wasn’t going to happen, but with rumors swirling that Batman would die in this flick and Christopher Nolan being an incredibly ballsy filmmaker, there was a small part of me that thought it might happen and even that it should have happened. I left Avengers feeling pumped up and fueled by geek-love, but I actually felt good about humanity after watching Rises.

So, Dark Knight Rises has the leg up in my mind, but that doesn’t mean I like Avengers any less. They’re both hallmarks of filmmaking that should be appreciated by all kinds of audiences. It’s amazing the kind of things that can come from comic book source material.