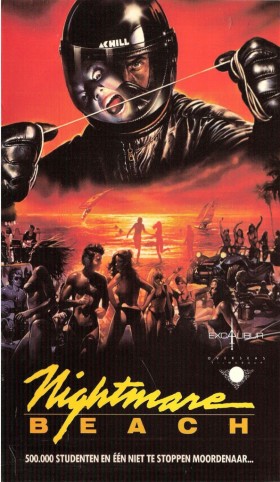 You know how sometimes you hear about a movie the combines to fairly different genres and it turns into a “two great tastes” kind of thing? I was hoping for that when I read my pal Ricky Purdin’s post about Welcome To Spring Break (a.k.a. Nightmare Beach, a far better title) on his blog VHS Notebook. As even the least informed UnitedMonkee reader will by now have noticed, I’m a big fan of horror movie as well as 80s teen comedies. See, the flick is a slasher-type horror flick set in spring break that was actually made in the 80s. That sounds like a pretty perfect cocktail.

And it sort of is and sort of isn’t. Yes, it’s a perfect amalgam of those kinds of films, but it also carries over the low quality that was common in both genres towards the end of the 80s. These kinds of movies had made a ton of money and were being churned out like crazy for the waning drive-in market and the increasingly popular home video one. It does have three very recognizable faces to horror fans, though with John Saxon of A Nightmare On Elm Street (as well as Enter The Dragon), Michael Parks who went on to star in Kill Bill and Red State and character actor Lance LeGault who was also in Stripes.

I should probably explain the plot. A college quarterback who blew a huge game finds himself on spring break with his pal. As it happens, this particular spring break town is the home of a biker gang known as the Demons whose leader El Diablo gets killed in the beginning. People start getting killed by a helmeted biker whose motorcycle electrocutes people (I know I’ve seen another movie about a killer motorcycle but can not place it for the life of me). Some people think it’s El Diablo returned from the dead, others think it’s one of the gang members and there’s even some signs pointing towards one of the cops. The quarterback gets involved when his pal gets murdered and he teams up with the cute bartender whose sister was killed by El Diablo previously.

The movie has some alright kills, though nothing mind-blowing. I did think it was kind of cool how weird the mode of murder was. This could have just as easily been your basic slasher flick with a guy running around spring break and offing naughty teenagers, but going with the somewhat odd choice of a vehicle doing a good portion of the killing was kind of interesting. I didn’t even see the killer coming, partly because I wasn’t paying full attention and partly because you never really know who’s going to turn out to be important in these things and who’s just there because they’re the producer’s niece or whatever.  Actually, I’m winning myself over the more I write this post. It felt a little long when I watched it, but thinking back, I’m kind of digging the weird experience. I think this movie would have been a lot better if I was watching it with some pals and beers.