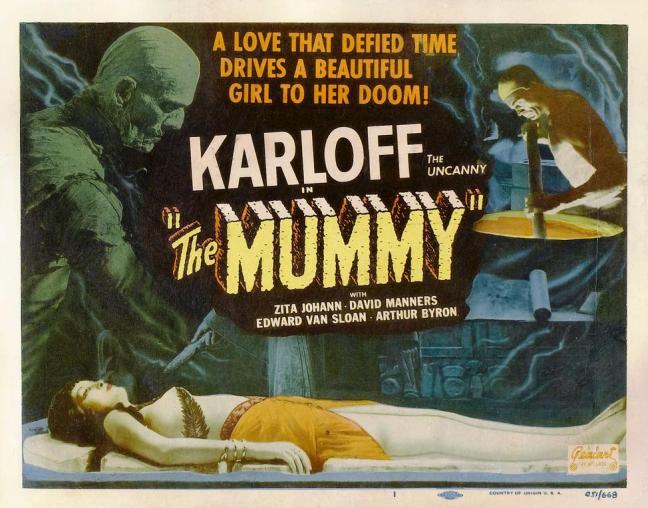 I really wish I had watched The Mummy before Dracula. Not only do both movies follow the Universal Monsters equation I mapped out in that previous review, but Mummy was modeled after the plot and structure of Dracula. Had I watched Mummy first, I would have still been pretty bored with Dracula, but I would have enjoyed this movie even more because it would have felt a lot more fresh.

Which is to say that I really enjoyed The Mummy, I just had an idea of where it would go based on the other flick. The story, which I wasn’t overly familiar with, follows Imhotep, a mummy who gets dug up, comes back to life and turns into Boris Karloff. He’s running around looking like a regular dude (or as regular as Karloff can look) and happens to find this lady named Helen who looks just like his ancient Egyptian wife. There’s some stuff in there about reincarnation and we actually get to see flashbacks on a TV screen of sorts which is funny.

Anyway, there’s still a lot of old dudes standing or sitting around talking about the bad things happening, but this movie just held my attention a lot better than Dracula did. Bela Lugosi definitely had presence, but he was about it, no one else in that movie aside from maybe Renfield was ultra interesting. In this movie you’ve also got the captivating Zita Johann as Helen who looks kind of like Christina Ricci. And, man, Karloff looks rad even as just himself, but him as the mummy is still creepy as hell.

I think I can safely say, having watched Dracula, The Mummy and The Invisible Man relatively recently, I can say Mummy is up there with Creature From The Black Lagoon as my favorite Universal Monster movies. It’s been a while since I’ve seen Frankenstein and I have zero experience with the sequels, but will hopefully remedy that later this month. I gotta say, these movies are great for me because they’re short and they’re not super scary so I can watch them with Lu up, which doesn’t work for some of the more modern flicks. Assuming they’re on Netflix Instant, which sequels should I focus on?