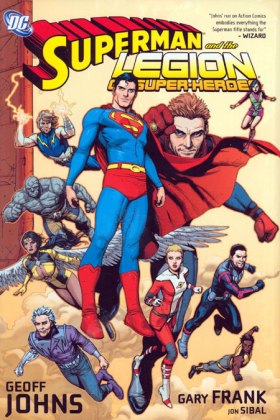 As I probably over-stated when I wrote about Geoff Johns’ first three volumes of Action Comics, I had a few problems with this run when it first came out. I wasn’t a fan of the Superman continuity I was familiar with getting tampered with, changed and possibly ignored, and this Legion of Super-Heroes arc was actually a part of that, but also helped turn me around on the whole thing. You might not remember, but back in 2005 Mark Waid kicked off a brand new version of the Legion that I really enjoyed. I’m not a big fan of that concept because it’s pretty difficult to get into — I posit that the Legion and X-Men are the two most difficult to crack comic book franchises of all time thanks to all the continuity — but that series was easy to get into because it was a full-on relaunch. As such, I was confused when this arc hit and a new-old Legion was on the scene.

And yet, Johns handled this story and these characters in such a way that I got sucked right in. Plus, I think that Gary Frank is one of the greatest, most interesting superhero comic book artists around and should draw every book, so that sucked me right in. The story here finds Brainiac 5 bringing Superman into a future where a one time Legion reject now called Earth-Man and his cronies in the Justice League have tricked the people of Earth into believing that Superman was a human and that aliens are all awful. They’ve also turned the sun red, so when Superman gets there, the only powers he has are the ones given to him by the Legion flight ring.

And that’s where Johns nails Superman once again in his run on the character. He’s a guy who will not only continue fighting even though he has no powers, but also do so while wearing the iconic costume that makes him as much a target as it does a symbol. Supes ain’t gonna back down from that, he’s going to fight for what’s right. As far as the Legionnaires go, Johns incorporated the imprisonment of like half the team as a way to keep this huge team from becoming too unwieldy for newcomers to the idea. The ones he did decide to showcase all had their own distinct personalities that seem to jibe with the versions I’ve read in books like The Great Darkness Saga, An Eye For An Eye and The More Things Change (they really need to just buckle down and collect everything Legion-related). He also does that wonderful, magical thing that Geoff Johns excels at where he can take a lame old character like Polar Boy and make him awesome.

There’s a pretty cool intro by Keith Giffen in this trade where he guesses that Johns will return to the Legion at some point because, as Giffen well knows, it’s a really difficult franchise to leave behind once you’ve really gotten into it. I could be wrong, but I don’t believe that’s happened just yet, but I would love to see him return to the franchise either in comics form or a film which is, now that I think about it, a really good idea considering it’s a teen superhero book filled with kids trying to figure out who they are, who they can love and who they can punch. 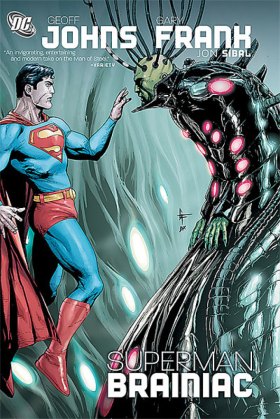 While Superman: Brainiac definitely continues the goodness from the previous book, I do have one quick complaint I have to get off my chest right off the bat: for some reason DC skipped Action Comics #864 and 865 which were written by Johns. I mean, this is a five issue trade with some material from a special, would it have been so hard to include two extra issues (or tacked one on at the end of the previous volume and the next here)?

Okay, enough grousing. This book finds, as you  might expect, Brainiac coming to Earth, which shouldn’t be a big deal, right? Superman’s kicked his butt a ton of times, right? No. What we learn is that every other Brainiac we’ve seen as but a part of the real Brainiac, the guy who stole Kandor from Krypton and eventually smashed it together with Supergirl’s one-time home Argo City.  Now he wants Metropolis, but Superman and Supergirl are standing in the way even though the very thought of facing this villain practically shakes Supergirl to her core. While Superman fights to defeat Brainaic, he sends one of his robots to attack Ma and Pa Kent which leads to the SPOILER death of Pa Kent by way of heart attack. It’s a moment that made me really upset and mad the first time around because my superfan brain wanted me to think he only did it to match the old continuity or the Richard Donner Superman films. But, that’s not the case. Reading all of these books together, Johns incorporated so many wonderful moments with Jonathan Kent in order to both set things up and show how wonderful their relationship is. He earned that death, you guys.

And that pretty much brings us to the end of Johns’ run on Action Comics. This arc would go on to become very important because it essentially launched the events that would become the New Krypton saga. At the time, I thought Johns was overseeing the issues that were written by James Robinson, Greg Rucka, Sterling Gates and a few other people. I’m still not finished reading through New Krypton and probably won’t be doing a multi-part review like these, but I do think it’s a really interesting story that deeply explored what Superman is about.