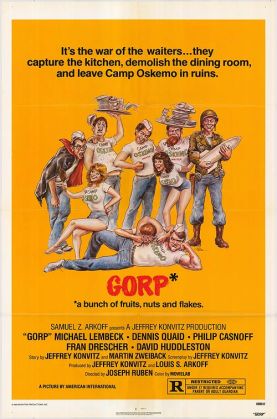 As I mentioned in my review of Summer School, I get really jazzed for watching 80s comedies when the weather gets nicer. The first thing I wanted to do was watch a camp movie along the lines of Meatballs, but Gorp was all that I could easily find on Netflix Instant. I actually remember watching part of this movie last year — I watched a ton of 80s movies, but only got around to reviewing half of them, if that — and had a pretty negative memory of it. At the time I remembered it as a really wacky, frenetic, all over the place comedy that was kind of a mess. But, upon giving it a second change, I realized that, while it does have some of those elements, it’s nowhere near a mess. Tone-wise, it’s a lot more in line with something like Animal House, which I somehow didn’t pick up on the first time around. You can tell that the story was written based on some wild camp stories, but when you pack all those different stories into one place, it can seem a little over the top. Since this is a comedy, though, that’s not a bad thing.

I’m actually really glad I gave Gorp another shot because, while it’s not going to top my list of favorite camp movies, it’s a pretty good entry in the genre. You’ve got the super slick 80s leads who make it their mission to split time between getting girls, playing pranks and, oh, also doing their jobs as wait staff at a summer camp.

One of the problems with watching any of these movies is the treatment of sex and women. The two leads send two of their nerdy co-workers to snap pictures of the incoming ladies which then get passed out to the guys as if they’re promised cattle. That’s far from the end of it, with the men often thinking the women are simply there for their sexual gratification, but there are actually some surprisingly strong women in this film. The main object of the leads’ affection, Vicki very clearly tells them that she does not have sex. At the same time, Fran Drescher owns her sexuality and doesn’t see she shouldn’t be able to do what the guys do. Now, while there elements aren’t exactly bright spots in the film, I would also say that they’re presented within a context that makes sense within the film, especially when you realize that A) the opinions are being stated by completely immature dudes from the lates 70s/early 80s and B) that it’s a comedy that was most likely encouraged to have as much T&A as possible. I mean, this is the kind of movie you’re watching:

Because it’s a fairly broad comedy, you wind up with a broad variety of characters from the well-rounded ladies I already mentioned to nerd and fat kids stereotypes that are so old and tired they make me angry. And yet, there are some rare moments in addition to the comedy bits that I enjoyed. At one point, one of the two main guys gets fed up with how weird his surroundings are and goes on a minor rampage. On one hand it’s a kind of meta moment because some viewers had to be thinking the same thing about the people they were watching around this time, but it’s also an effectively emotional moment where a human being realizes that hanging out with goofballs and freaks, which might seem cool to a young person, does not a happy life make. It’s actually a big sign of inner growth if you think about it.

But, don’t expect a film that features a real evolution of character. For that one moment, you’re treated to a whole cast of one-note, yet often still funny, kitchen workers who get their own fair share of screen time. Hell, the end of the movie features a fireworks war that leads to the destruction of the cabin all our main characters lived in. But that’s followed by another emotionally important moment, the one where the kids tell the mean camp owner to go screw himself, it’s time for them to branch out and make their own lives. I know I’m thinking about this way too much, but it’s another important developmental moment that makes this movie more interesting than many of the ones that would come later in the decade.

By the way, as the poster points out, the title is another name for trail mix (one I’d never heard before). I wrongly assumed it was an anagram and kept trying to figure out what it could mean without coming up with anything close to an answer. The tagline “a bunch of fruits, nuts and flakes” is actually pretty clever when you take that into consideration.