After watching Skyfall, I wanted to look back and see what I had to say about Casino Royale and Quantum Of Solace. As it turns out, I wrote my reviews back in March of 2011 and never posted them for some reason. I gave the posts a read-through and made a few changes, but I kept it “of its time,” which means I foolishly thought I’d be watching Skyfall in the theaters instead of on Blu-ray a year after it came out. Silly Past TJ!

As I mentioned when I kicked off these Digging Double Oh Seven posts with a review of the novel version of Casino Royale, I didn’t have very fond memories of the 2006 film version because it never seemed to end with scene after scene in the 144 minute movie’s last act that kept seeming like it should be the final one. Bond is saved by a mysterious killer? Good stopping point. Bond’s in love? Good stopping point. Of course, I didn’t know when I first saw the movie that SPOILER the girl he fell for would turn out to be a bad guy and that was as important to the story as the game of Texas Hold Em or the testicular trauma he endures.

All that is a pretty long way around of saying that I really liked Casino Royale the second time around and, in fact, there was only one bit that bugged me, but I’ll get to that. There’s that awesome black and white scene in the beginning where Bond earns his Double Oh status, which I understood a lot more having read the book. Then there’s the sick animated opening credits followed by a bonkers parkour chase scene between Bond and a bomber through an old construction site. Unlike most of the other Bond movies, this one is a lot more physical with Bond being exactly as much of a badass as I’ve always wanted him to be and that counts for a lot. Plus, the action itself feels real. It reminded me of a Thai martial arts flick where everything looks painful and real. A lot of people compare these two new Bond movies to the Bourne flicks which I’m sure is fair. I’m not as familiar with those movies, but one thing I do remember is that the fight scenes are very jump cutty whereas it seems like the camera doesn’t move from Bond very much when he’s throwing down. I love, love, LOVE the part where he’s chasing the bomber and just bursts through a wall.

Story-wise the movie follows along with the book pretty well, adding plenty of new stuff. One of the newer aspects to the franchise is that this film acts as a bit of a reboot. I’m torn on this. On one hand, I’m sad to know that the Bond series I’ve come to know and love is no more. That version of Bond ended with Pierce Brosnon. On the other hand, it makes sense to reboot things and set Bond in a more modern world because dude would be pretty damn old by this point. So, I guess I’m okay with it. Speaking of changes, I also really dug Daniel Craig as Bond. I’m not one to get bent out of shape because he’s blonde. Who cares? He embodies the intensity and physicality of the character to a T. The only problem I have with this new version (no fault of Craig’s) is that he isn’t the suave, lover of fine things that our hero is when he’s first introduced in the book. We can see him grow into that a bit (as well as the theme song and some of the catchphrases, which were nice touches) but I really appreciate that aspect of the character from the books and the pre-Dalton flicks.

This time around, I knew what to expect with the story, so it wasn’t so jarring for me. Even though it’s the longest Bond movie in the series, it didn’t feel like that this time and I’m happy to say that this is one of the few movies my opinion has been switched on. I feel so mature! 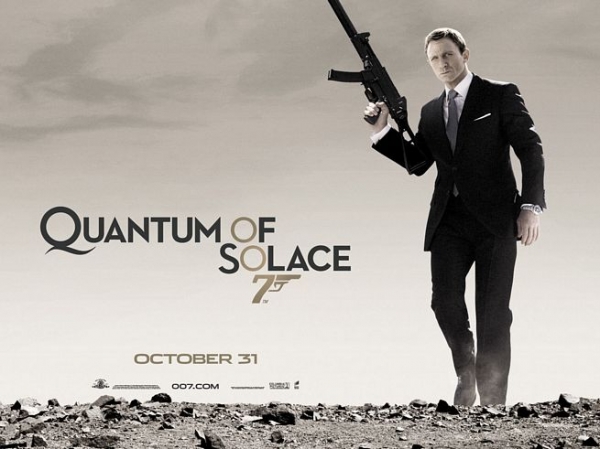 Everything I had read or heard about Quantum Of Solace said that it was important to watch Casino Royale right before. Man, were they right. The missus and I watched the movies back-to-back the other night and it was super helpful. Quantum isn’t just the next adventure of James Bond like all of the other flicks in the franchise, it’s a direct continuation of the story. Casino ends with Bond trying to figure out who was pulling his lady’s strings which leads to a manhunt this time around. I’ll just get this out of the way right now: I really liked this movie too.

Craig’s equally as awesome as Bond, even getting a little sophisticated, but still retaining some of his “blunt weaponess” as M called him in the previous movie. The flick has great action set pieces from a sick chase to a run through a burning building. All great, all around. I was also impressed with how very traditional the main villain’s plan was as far as Bond movies go. This guy redirected all the water in Bolivia so that he could then sell it back to the new regime. That’s vintage Bond.

Another aspect of the movie that I appreciate is that it actually does one better than the novel series in my opinion. With the books, Casino Royale ends very much like the movie does (with Bond betrayed and trying to figure out who is after him) which leads him into Live And Let Die. The promise at the end of the book version of Casino states that Bond is driven to find the members of that organization, but by Live he’s hunting down thieves in America and beautiful islands. Quantum takes the premise and really runs with it. I’m not 100% clear on how everything played out (we were working on baby stuff while watching the flick) but I appreciate that the filmmakers actually went after it and got Bond his revenge. Now he can move on. Actually, now that I think about it, it actually makes more sense for a young inexperienced Bond to fall for a woman as opposed to the more experienced version in the book. Well played. I hope Sam Mendes gets his cast together soon because now I’m itching to see a Bond on the big screen again for the first time since Die Another Day (I missed the most recent pair, shamefully).